When John Richmond stopped piloting DC-3s to take the helm of a Key West bar and restaurant, his workplace didn't change. Despite the career shift, he still plies his trade at Key West International Airport.

Richmond first moved to Key West in 1978 as a 23-year-old co-pilot for the now-defunct Air Sunshine, nicknamed Air Sometimes by locals because of its unrepentantly erratic schedule. He quickly became intrigued by the island's "mañana" mindset, aura of cheerful eccentricity and lack of real-world rules.

"There would be like 15 of these cute little girls and Tony," Richmond said, chuckling. "He would get them all drunk, and we would have to cancel flights the next day."

Along with Key West's easygoing outlaw atmosphere, Richmond found a warmhearted small-town community that took care of its own. In the mid-1980s, he also found a business opportunity that grounded him in that community — both literally and figuratively.

In 1984, his friend Fred Sellers had opened a bar and restaurant at the island city's airport that he named the Conch Flyer. After Sellers' young child died tragically, he lost his enthusiasm for the bar business and convinced Richmond to buy the place.

At that time, the law mandated that Key West bars close at 4 a.m. — but through what Richmond calls "an aberration," the Conch Flyer was exempt from that law. Under his guidance, the bar did more business from 4 a.m. to 7 a.m. than it did all day long.

"It became a clubhouse for all the bartenders and strippers and bouncers and service people," said Richmond. "I guess we did that for eight or nine years — and for those of us that lived though it, it was a lot of fun."

Admittedly, the clubhouse had its own rules. Its volunteer bouncers even ejected television news personality Geraldo Rivera after he did an unfriendly expose of Key West bars.

As the years passed, Richmond and a management team that included his father ran the Conch Flyer with a light hand, providing generous cocktails, casual food and a quirky yet always accepting atmosphere. The place grew into a haven where airline passengers and partying locals could share drinks, stories and an unexpectedly comfortable camaraderie.

More than a decade ago, Richmond met a special education teacher named Nancy who ultimately became his wife. He began splitting his time between Key West and Lake Tahoe, where he and Nancy have a ranch and five St. Bernards.

Subsequently, because of the expansion of Key West's airport, the Conch Flyer too moved to a second home — a 4,400-square-foot space in the airport's new terminal building.

Despite its larger size and outward gloss, it's still the same welcoming place it always was. The walls are lined with photos and posters depicting the history of the airport and Pan Am, which was launched in Key West, and scores of "people" shots.

"The pictures are people that have worked at the airport throughout the years, a lot of people who have died, all the old bartenders ... people that have been here over the years that aren't with us anymore," he said. "Key West to me was always about the people that I found here."

Behind the long bar and above the door are replica 1927 engines that Richmond commissioned. Also displayed are treasured model airplanes handcrafted by an old friend named Rudy, who never mentioned his hobby until he presented Richmond's father with the first of the collection — an exact model of the plane Richmond Senior had flown in wartime.

The construction of the new Conch Flyer was overseen by Richmond, who admits he loves the creativity of designing and building. He also completed a second bar and restaurant beyond the airport's security screening area in the departure lounge.

At both emporiums, Richmond's goal is to give them a taste of the authentic island atmosphere.

What better flight plan for the pilot of a bar and restaurant? 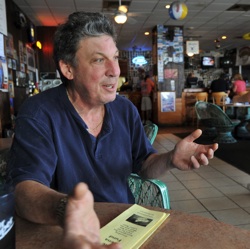 According to Richmond, the Conch Flyer grew into a haven where airline passengers and partying locals could share drinks, stories and an unexpectedly comfortable camaraderie. (Photos by Rob O'Neal/Florida Keys News Bureau) 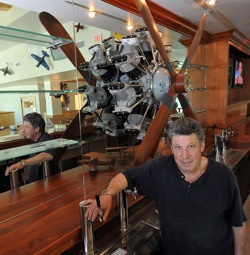 Behind the long bar is a replica 1927 engine that Richmond commissioned, and nearby is an exact model of the plane his father flew in wartime.