He peddled tacos from a three-wheeled bicycle when he first moved to Key West — and Tom Corcoran has never forgotten the irreverent, weird, magical island he discovered from that vantage point.

Alex’s creator first saw Key West as a Navy lieutenant when he was sent down for an eight-week training course. As he puts it, he “somehow slipped into island mode without an instruction book.”

Returning after his discharge, he was quickly adopted by Key West’s renegade literati — among them legendary poet/novelist Jim Harrison and author Tom McGuane.

“My first job was selling tacos from a three-wheeled bicycle, three for a dollar,” said Corcoran. “I used to go around to John Brown’s Bar and Tennessee Williams would buy rounds of tacos for his entourage, as long as anybody would eat them.”

Later, Corcoran began a friendship with singer/songwriter Jimmy Buffett, whose Key West experiences inspired his best-known songs. Corcoran shot cover photos for some classic Buffett albums, and the friendship has endured for more than 30 years.

“I learned a lot from being around Jimmy — he was a natural businessman as well as an entertainer,” Corcoran said. “Between the lessons to be learned just watching him work and the encouragement he’s given me, it’s been a great relationship.”

Although he had imagined becoming an author in his teens, in Key West Corcoran sampled careers including bartender, disc jockey, and photographer. A well as Buffett’s album covers, his photography adorns book covers for such well-known writers as McGuane, James W. Hall, and Les Standiford.

Eventually, Corcoran moved to Alabama and edited a magazine called “Mustang Monthly.” Yet he couldn’t get Key West, or the desire to write books, out of his mind. In the 1990s the two melded into his first published mystery, “The Mango Opera.”

“’The Mango Opera’ reconnects my heart and brain to Key West,” wrote Buffett at the time of the book’s 1998 release.

Corcoran set the book in the island city not just because he knew its people and places so well, but because he thought it wasn’t being depicted fully and fairly.

“Other than James Hall’s and John Leslie’s, there just weren’t enough good books about a place that deserved better,” said Corcoran. “I wanted to tell stories that hadn’t been told, and I wanted to help the world get close to the island’s soul.” Corcoran’s Key West has a strong, elemental appeal. He portrays the steamy, raffish, independent island with a wry affection and a bone-deep authenticity that leaves readers practically able to smell the seaweed on the beach.

His lead character, Alex Rutledge, shares his love for Key West and his talent for photography — a talent that propels Alex into the midst of mystery with great regularity.

“I didn’t know enough about police work or being a private eye to make Alex a policemen or a detective, but I wanted to have him have some ties to the law enforcement community,” Corcoran explained. “So, since photography had been my profession, I decided Alex would be a freelance photographer who would do the city and county forensic work.”

Readers who know Key West will recognize its streets, bars, landmarks and lifestyle in the book — just as Corcoran intended. Though he now lives elsewhere, he visits Key West frequently for inspiration, relaxation and periodic book signings.

“At a book signing at the Blue Heron, a young man who was in line to get his book signed said to me, ‘I’m a Conch and I grew up on this island, and you got it right’,” recalled Corcoran. “That’s one of the greatest compliments I’ve ever received.” 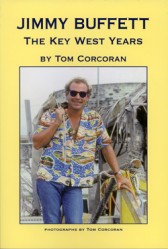 Besides his mystery series, Corcoran is also well-known for his photo collection depicting his friend Jimmy Buffett's Key West years. 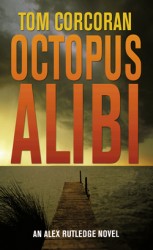