TAVERNIER, Florida Keys — It seems everyone knows her or knows of her. Laura Quinn is the quintessential “bird lady,” a name she earned over the years since founding the Florida Keys Wild Bird Center at mile marker 93.6 in Tavernier.

Located in a natural Upper Keys setting beside Florida Bay, the center is dedicated to rescuing and rehabilitating ill, injured and orphaned wild birds and releasing them whenever possible. Some at the center are recuperating, while others that are unable to survive in the wild become lifelong inhabitants.

Visitors hear “Hey, Miss Laura, what’s new today?” along the boardwalks of the center as Quinn takes daily strolls through canopied hammocks to feed the hoards of pelicans that gather waterside for a 3 p.m. feast of fish.

“We try to keep them out of the marinas and come here to eat,” she said.

Visitors can sit front and center among dozens of the pelican “regulars” whose eyes search inquisitively for fish buckets.

When Quinn comes, they follow. Closely. As staff feed a variety of egrets, owls, herons and cormorants that are either transient or injured, birdwatchers and eco-tourists experience an up-close, personal interaction.

Once a statistician and mathematics teacher, Quinn always loved nature. She and her husband were sailors, eventually relocating to a home in Lower Matecumbe.

“I’d get bored on the boat,” said Quinn. “I tried to knit or crochet, but woodworking seemed to be the thing I could do that was okay to get wet.”

To counter her boredom, she began carving native birds that she encountered in the Keys.

Eventually, her interest in avian species led her to collaborate with a veterinarian, Dr. Robert Foley, to provide modest rehabilitation facilities behind her small oceanfront home. But when the sick and injured birds she cared for increased in number and species, expansion became necessary.

With a bit of luck, Quinn said, she discovered and acquired a 5.5-acre property on which only three-quarters of an acre could be developed or built upon — just enough space for a house and office. The rest of the property was (and remains) lush native vegetation, mangroves, hammocks and wetlands.

After completing the licensing and incorporation, Quinn opened the Florida Keys Wild Bird Center officially in 1991. By reading bird books and observing Dr. Foley, she learned how to operate on her feathered patients, repairing their broken wings and removing fishhooks and monofilament line.

“Dr. Bob eventually told me, ‘You’re on your own now, Laura, you’ve got the hang of things,’ ” said Quinn. She’s been the resident bird surgeon since, with a support staff of seven.

The center’s goal for its patients is successful rehabilitation — meaning the recovered bird can return to the wild to continue its natural life cycle, including reproducing its species. However, that’s not always possible.

The center also houses permanently disabled birds that live out their lives protected at the no-euthanize facility. These “citizens” include three species of owls, six species of hawks and falcons, six species of wading birds and four species of gulls.

A self-guided tour along the boardwalks and nature trails allows a close look at resident hawks, ospreys, spoonbills, egrets and more. The scenic route also features minnows and crabs along with colorful bromeliads enhancing the landscape and water’s edge. Highlights at this natural habitat include catching a late afternoon bird feeding.

While Quinn focuses much of her energy on maintaining the center and caring for its flock, she has not abandoned her previous creative endeavors. Her lifelike, brightly colored carvings of owls, egrets and herons — crafted mostly as special requests for friends and followers — are on display in the property’s gift shop.

Located at mile marker 93.6 bayside, the Wild Bird Center is a rustic tribute to Florida Keys wildlife, worth an afternoon of birdwatching and picture-taking. Photos by Julie Botteri 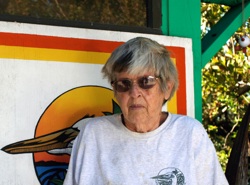 Laura Quinn, aptly nicknamed the 'bird lady,' has devoted decades of her life in the Keys to the well-being of wild herons, pelicans, cormorants, owls and more. 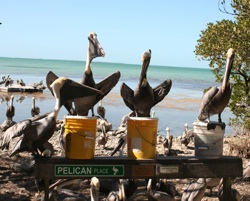 At 3:30 p.m. every afternoon, scores of hungry pelicans come to the Center's waterfront, called Pelican Place, for a fishy snack.

A self-guided tour along the boardwalks and nature trails allows a close look at resident hawks, ospreys, spoonbills, egrets, and herons, such as these. 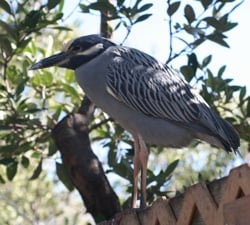 "YC," a yellow-crowned night heron, has returned to the Wild Bird Center each winter for 12 years in a row since his rehabilitation here.