When Howard Livingston and Mile Marker 24 step onstage to perform their trademark tropical rock, they bring along an unusual “instrument”: a 1952 Johnson 5.5-horsepower outboard motor used to blend margaritas for the audience.

Odd as it might appear, the funky hybrid blender is the perfect accompaniment to the band’s infections melodies, which bear titles like “Blame It On The Margaritas” and “Livin’ On Key West Time.”

Yet even more appealing than the free margaritas is the passion Livingston projects with every lyric he sings and every chord he strums — a passion for the Florida Keys that inspired the dissatisfied Chicago manufacturing company owner to become a carefree, fulfilled musician who lives on the water in the Lower Keys.

Livingston first visited the Keys in the early 1980s. A sailing enthusiast who had a boat on Lake Michigan, he rented a sailboat in Islamorada and began exploring the area.

“I went up and down the Keys and fell in love,” he said. “Every waking moment from that point on was spent in wondering, ‘How do I move there? How do I live there?’”

In the early 1990s, Livingston bought a piece of land on Summerland Key and built a house. Though still tied to his northern corporate life, over the years he spent increasing amounts of time escaping to Summerland.

“I just felt like the Keys were the place I should be,” said Livingston.

While he came from a musical family and enjoyed writing songs, he had put his love of music on hold for most of his adult life. Then, during a business trip to China, his yearning for the Keys inspired him to write a song he named “Livin’ On Key West Time.”

Lighthearted and melodic, it would become one of his signature tunes and the title of his first CD.

The song helped crystallize Livingston’s desire to live the Keys lifestyle full-time. Four years ago he moved permanently to the house on Summerland, located near Mile Marker 24 of the Overseas Highway that spans the island chain. The move gave him the freedom and inspiration he needed to launch his music career.

Today, Livingston and his Mile Marker 24 band — composed of core members Jason Miller on guitar and vocals and Dave Herzog on percussion and steel drums, plus additional players for touring and recording — are debuting their first live CD/DVD combo and finishing the tracks for their fifth CD. Previous CD releases include “Meet Me In The Keys” and “Blame It On the Margaritas” as well as the career–launching “Livin’ On Key West Time.”

Their tropical rock sound is so popular that their recent summer tour included 20 states and more than 20,000 miles. In great part, Livingston says, that’s because the music is an expression of the Florida Keys experience.

“Being in the Keys is the biggest single influence on me as a person and on my music,” he said. “We probably don’t realize how fortunate we are to live here, because just about everybody in the world wants to be doing what we’re doing — whether they’re a doctor or a lawyer or a street cleaner.”

In fact, one of Livingston’s greatest songwriting challenges is distilling the Keys’ attitude and atmosphere into three or four minutes of music and lyrics.

“That is the most difficult thing to do,” he admitted. “I can sit down and write a song about the Keys that can be 20 minutes long, and I wouldn’t have started talking about how wonderful it is.”

To make the process manageable, Livingston focuses on capturing small snapshots of Keys life and his experiences in his island home. He and the band have shared those snapshots with national audiences during performances on CBS’ “The Early Show” and ABC’s “Good Morning America.”

Whether his listeners are television audiences, concert–goers or CD purchasers, Livingston hopes the music will evoke one fundamental emotion in them: happiness.

“We just want it to be feel-good music, and perhaps a little bit of escapism,” he said. “No matter how crazy the world gets, that warm, safe, tropical place of the Florida Keys is always there.”

Livingston shares his life in the Keys with Cyndy Wayt, who he describes as his soulmate, and their three dogs. Wayt and the canines — two golden retrievers and a Portuguese water dog — accompany him on tour.

Also along on every tour, and prominently featured at concerts, is the Johnson outboard “blender” used for concocting margaritas onstage. The prized machine even has its own travel case to keep it secure on the road.

Livingston discovered the outboard on a scrap heap at a Keys marina.

“I had an ex-neighbor in Chicago who builds race cars, so on my next trip to Chicago I took the motor and the canister of a blender, walked into his house and said, ‘Make this fit on here’,” Livingston said. “About a week later, he called and said, ‘Next time you come to Chicago, bring some tequila’.”

To learn more about the man whose music captures the essence of margarita–kissed days in the Keys, visit milemarker24.com. 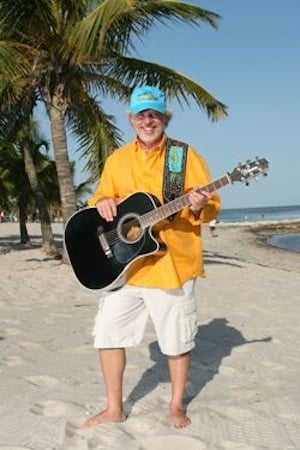 Livingston traded the corporate life for the island life, and hasn't looked back. (Photos courtesy of Cyndy Wayt) 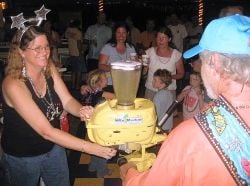 On every tour, and prominently featured at concerts, is the Johnson outboard “blender” used for concocting margaritas onstage. 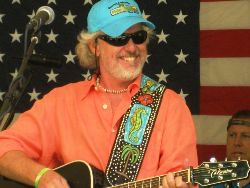 Livingston hopes his music will evoke one fundamental emotion in people: happiness.