UNDERWATER WITH PSYCHO AND FRIENDS

There's Oscar, Psycho, Rusty and Flash from the barracuda family. Then, there are Melba, Sundance and Slime from the moray family. And the captain would never want to forget about Shreader, who has left his mark on Slate.

It's because of his regular "visits" with these and other marine creatures that Captain Slate has become a legend in the Florida Keys and a well-known celebrity in both diving and non-diving circles.

Slate developed his passion for his extraordinary "friends" under the tutelage of Steve Klem, who was a pioneer dive operator in Key Largo in the mid-1950s.

"He was a wonderful guy who loved the creatures and just wanted to introduce them to the people," said Slate. "I used to go watch him do the feeding and we became best friends."

Slate took over feeding Klem's creatures in 1978 — and today continues to offer Creature Feature dive excursions, giving dive visitors an up-close and personal introduction to many of his underwater pals.

Divers can even "hug" a moray eel and tickle its tummy. Snorkelers also can enjoy the show and interact with fish brought closer to the surface by staff from the sandy bottom 25 to 30 feet below.

One Creature Feature "regular" is a gentle giant nicknamed Bruiser — a goliath grouper with spotted skin and a rounded body that weighs about 350 pounds. From November to May, Bruiser meanders around the reef hiding under rocks. But for Slate and his excursion participants, Bruiser emerges with a fishy smile to be hand-fed by new friends.

Divers also can watch Slate feed Sundance, the moray eel named for the way she moves.

One of the excursion's highlights demonstrates the trust and affinity between Slate and his undersea friends. Slate holds bait clenched in his teeth, and a silver bullet-like barracuda named Lightning strikes just centimeters from his dive mask to take it.

Slate's unusual undersea comrades have been featured on the Discovery Channel, SEATV, Animal Planet and dozens of television shows as well as in many dive magazines.

"The thrill is introducing new divers to these animals," said Slate. "We want divers to be educated so they don't get hurt and they don't hurt these amazing creatures."

Captain Slate has become a legend in the Florida Keys and a well-known celebrity in both diving and non-diving circles; he has been cultivating marine relationships for 30 years. (Photo by Frazier Nevins) 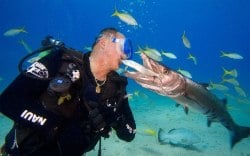 Slate demonstrates the trust he has with his underseas friends; here, he gives Sundance a hug. (Photo by Stephen Frink)