According to officials at the Taxi, Limousine and Paratransit Association, Five Sixes is the first taxi company in Florida to roll out hybrids.

The cab company's officials project that the new fuel-efficient vehicles will get about 38 miles per gallon in the city, compared to their previous vehicles' 12 to 13 miles per gallon.

Though Doelman said he spent more than $300,000 to purchase and outfit the first 10 hybrids -- including painting them the company's trademark hot pink -- he expects benefits in reduced fuel costs and passenger enthusiasm.

"It's nice to know that Key West is very progressive on environmental issues, and you can ride in a taxi cab without really having to worry about the environment," said Don Menard of The Villages, Fla., who was one of the hybrid fleet's first passengers.

The company plans to replace its other 13 sedans with hybrids by March 2009, and replace its 23 seven-passenger Maxi Taxis when a suitable hybrid van becomes available. 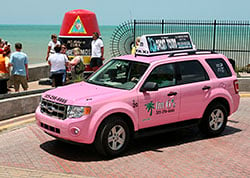 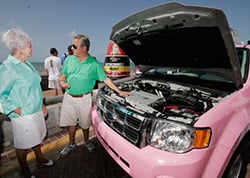