FLORIDA KEYS - Stretching more than 100 miles into the open ocean, the Florida Keys can boast early settlers ranging from Bahamian fishermen to Cuban cigar makers and New England merchants. In such a rich melting pot, it's natural that the indigenous cuisine came to incorporate diverse and delicious influences - with a reliance on an abundant array of fish and seafood harvested from surrounding waters.

Commercial fishing, in fact, is the second-largest industry in the Keys. The fresh fish that graces a restaurant table at night was probably unloaded at the docks that morning, and fish and seafood headline nearly every restaurant menu.

Among the favorites are Key West pink shrimp, a delicacy generally considered sweeter than other crustaceans. Whether sautéed in scampi, battered and fried, nestled atop salad or pasta, or simply steamed and served with savory sauces, Key West pinks rank among the most popular of the Keys' "natural resources."

The mollusk conch (pronounced konk) is served in many mouthwatering forms: lime-kissed salad, spicy chowder and golden deep-fried fritters among them. Conch chowder can either be tomato-based or white, but don't expect to find any consistency of recipes from one restaurant to another. Keys eateries pride themselves on creating unique interpretations of classic dishes.

As well as savoring the taste of conch, Keys residents admired the mollusk's tough, hardy nature so much that they adopted its name for themselves. Today, conch is no longer fished in the Keys, but the word Conch refers to someone born in the island chain - which is affectionately known as the Conch Republic.

Stone crabs, renowned for their sweet and succulent meat, also are a popular delicacy. Because nearly all of the crab's meat is contained within its grapnels, these are the only portions of the crustacean that are harvested. Once the claws are removed, the crab is returned to the sea where, over the course of up to two years, the claws regenerate. It is for this reason that stone crabs are considered a renewable resource, and the Florida Keys are responsible for about 40 percent of the state's overall harvest.

Stone crab claws are most commonly served warm with drawn butter or chilled with mustard sauce. The meat of the claws also can be used in crab cakes, fritters and stuffing. Florida's stone crab season runs from Oct. 15 to May 15.

Unlike stone crabs, lobsters found in the Keys are clawless. Known as spiny lobster, they offer sweet and tender meat. Local restaurants often serve them steamed or boiled with drawn butter - or their meat might be made into salad or served with exotic sauces. Lobster season runs from Aug. 6 to March 31.

Yellowtail snapper, hog snapper, mutton snapper, grouper and dolphin or mahi-mahi are just a few of the Keys' scale fish preferred by chefs. At restaurants throughout the island chain, diners can find sautéed yellowtail or snapper with a variety of sauces and accompaniments, along with fried grouper or mahi-mahi sandwiches, broiled or blackened fish entrees and much more.

In addition to offerings from the sea, Keys cuisine reflects a multitude of cultural influences - particularly Cuban in Key West. Migrating across the water by the thousands in the late 1800s, Cuban aristocrats and cigar makers brought the flavors of their homeland with them. Ropa vieja, a name that literally means "old clothes," tastes like heavenly shredded beef.

Other favorite dishes are picadillo and roast pork or pork chunks. Cuban entrees are most often served with traditional black beans and yellow rice, sweet plantains and Cuban bread.

Surprisingly, some of the best Cuban sandwiches - Cuban bread stuffed with meat and cheese and warmed in a press - can be found at take-out stands attached to many island laundromats. And many savvy residents can't start the day without a breakfast of toasted Cuban bread and Cuban coffee, which packs a ferocious jolt.

When it comes to desserts, it's almost impossible to spend time in the Keys without sampling Key lime pie. Just as New Orleans is famed for its gumbo and Chicago for its pizza, the island chain is known for its signature dessert.

There are no commercial Key lime groves in the Florida Keys today, but Key Largo boasted a large Key lime industry until about the mid 1930s. Restaurants throughout the Florida Keys and Key West continue to use Key limes and their juice to enhance seafood dishes and sauces, as well as in pies.

According to the owner of Key West's Curry Mansion Inn, a woman named Aunt Sally - the cook for estate owner William Curry - made the first Key lime pie. Key West historian Tom Hambright, on the other hand, surmises that Aunt Sally likely perfected a delicacy created by area fishermen.

Today, each restaurant places its individual hallmark on this special dessert, but its primary ingredients are condensed milk and tiny yellow Key limes. Often nestled in a graham cracker crust and smothered in whipped cream, Key lime pie is a sinfully indulgent finale for any island meal.

As rich as Key lime pie is, however, it can't compare to the richness of experience awaiting visitors to the Florida Keys. Whether feasting at a water's-edge seafood shack or a gourmet emporium, visitors will find a warm welcome, an easygoing atmosphere and a unique and memorable dining experience.

For more information about the Florida Keys & Key West, explore this Web site.

Fresh seafood markets are abundant in the Keys. 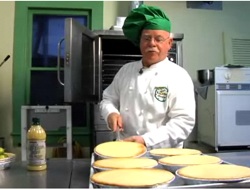