TAVERNIER, Florida Keys — At the age of 13, under aquamarine water in a flurry of bubbles where the only noises were his own breathing and the pounding of his heart, Ken Nedimyer fell in love.

“It was way too much for me,” he says of his first dive in the Florida Keys. “I knew I had to have more of this magical place.”

Growing up admiring Jacques Cousteau, Nedimyer knew he wanted to be a diver long before he ever tried it.

“I was hooked,” says Nedimyer. “When we came here on vacation, my parents had to tie me down to get me back in the car.”

That was in 1969. Six years later, he made it to Florida Atlantic University, where he earned his degree in the only marine science discipline available at the time — zoology with a marine biology emphasis.

By 1985 Nedimyer had opened Sea Life Inc., a licensed and permitted tropical fish collecting business based in Tavernier in the Upper Florida Keys. A family enterprise, it ultimately involved his wife Denise and their four daughters. They’ve spent many hours packing fish, crabs, snails, shrimp and live rock to be shipped overnight to customers throughout the continental United States.

These days, Nedimyer is assisted by his youngest daughter, 13-year-old Julia, who began diving when she was a small child.

“She’s my best diver,” Nedimyer says. “She’s smooth, at ease, pays attention, is one step ahead and always knows what to do.”

Nedimyer himself has become one of the world’s leaders in staghorn coral restoration.

He first noticed staghorn corals growing on his live rock in 1996. All stony corals are federally protected, but an exception in the live rock aquaculture program allows the sale of any corals that settle and grow on cultured live rock.

Instead of selling these, however, Nedimyer set them aside to let them grow. Over the next five years the corals experienced tremendous growth as well as a good deal of breakage from sharks, turtles and storms.

In early 2001, Nedimyer and his second daughter, Kelly, started growing the broken pieces as a 4-H project.

“We were the first ones to ever do that for a 4-H project,” he says.

The little pieces they started with grew fast and became small bushes within two years. In 2003, Nedimyer contacted officials with the Florida Keys National Marine Sanctuary and asked to transplant some of the corals to a site on Molasses Reef off Key Largo where a ship had run aground 20 years earlier.

“We took six clippings just to see what would happen,” Nedimyer recalls of the first efforts undertaken with sanctuary scientists, “and they all lived.”

“It’s amazing how fast the coral grows,” said Nedimyer. “A two-centimeter cutting will grow to 30 or 40 centimeters in a year.”

At the coral nursery, he and other volunteer divers clip pieces two or three centimeters long — about the length of a finger from the tip to the first knuckle — and mount them to pedestals with special underwater epoxy.

Each coral started from a “knuckle clipping” in the nursery is tracked by genotype, generation away from the parent colony and fragment number to track successes. After about a year, when they have branches and stand some four inches tall, they can be transplanted or used as parent colonies for more clippings. Corals transplanted from Nedimyer’s nursery have an exceptionally high survival rate.

Nedimyer shares his success with scientists and students around the globe. In 2004 Fabian Cousteau, grandson of Nedimyer’s early inspiration, went diving with him and his daughter Kelly to film a documentary.

Nedimyer’s work has drawn significant attention and appreciation from environmentalists and government bodies, as well as appointments to advisory panels in his specialty. But for the man who fell in love with the underwater world at age 13, the results of his efforts are reward enough.

“To me coral reefs are the crown jewels of God’s creation, and I feel called to be a good steward of them while I’m here on this earth,” says Nedimyer. “I’m excited this experiment is working … we’ll see results (of coral restoration) in less than a lifetime.”

For more information, or to take part in coral restoration projects, visit www.coralrestoration.org . 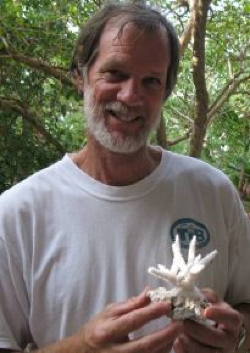 Ken Nedimyer has become one of the world’s leaders in staghorn coral restoration. 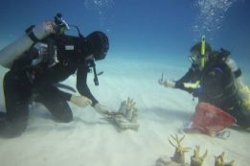 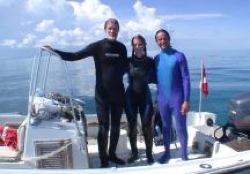 In 2004 Fabian Cousteau, grandson of Nedimyer’s early inspiration, went diving with him and his daughter Kelly to film a documentary. 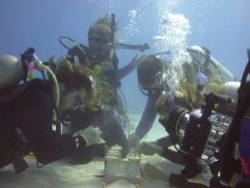 Due to Nedimyer's passion and direction, these volunteer students work on of the 1,200 Staghorn corals growing in the nursery for future restoration projects.