LOVE OF NATURE INSPIRED A THRIVING CAREER FOR BILL KEOGH

Bill Keogh took a childhood love of the outdoors and turned it into a career. He's the owner of Big Pine Kayak Adventure in the Lower Keys, nestled beside the Old Wooden Bridge Fishing Camp along a winding road near mile marker 30 on U.S. Highway 1 in Big Pine Key.

"When I was growing up I loved the outdoors - fishing, swimming, snorkeling - just being outdoors as much as I could," said Keogh. "I figured if I could continue that into adulthood, that would be a good idea."

His love of the outdoors is evident from a look at his business card that identifies him as an author, photographer and backcountry guide. A resident of the Florida Keys for 26 years, Keogh relocated to the region to escape the cold winters of Connecticut and Maine, where he was raised and attended college, respectively.

"It was November in Maine and it had already been below zero two consecutive days. That's when I read an ad that said 'spend the winter in the Florida Keys,'" Keogh said.

That ad was for a photo intern position at Newfound Harbor Marine Institute on Big Pine Key, the organizers of Sea Camp.

At the institute Keogh honed his photography skills, working for 10 years at the hands-on science facility where his projects took him on, in and under the waters of the Keys.

His transition to writing occurred when he began giving natural history presentations six or eight times a year as part of a program called the Discovery Nature Series.

"I gave slide show environmental and ecological presentations to any group that needed a guest speaker - college groups, school groups - and this led to me being contacted by a publisher who asked me to write a paddling guide for the Keys," said Keogh.

He went from guest speaker to author, he explained, "because it was easy to write a book from a slide show presentation I had been doing for a decade."

Keogh's photography also led to the creation of his kayaking business. It all began when the Lower Keys Chamber of Commerce hired him to provide the images for a brochure. The chamber's list included photos of canoes and kayaks, so Keogh visited the guide at Bahia Honda State Park.

"I rented a couple of kayaks to take some photos for the brochure, and the guide liked my work and was interested in buying my shots," he said. "After discussing pricing he realized he couldn't afford me so he bartered for them, offering me a couple of kayaks.

"I loaded up the kayaks with my above and underwater camera gear and my tackle box, including everything a fisherman would want out on the water, and I was basically hooked," Keogh added.

The four kayaks have grown to a fleet of 60 and a thriving nature guide business. Keogh offers his kayakers a complete experience, combining his kayaking expertise with his eye for nature and photography.

"What's great about the Florida Keys is the totally flat, open waters and the fact that the majority of the really cool wildlife are beneath you," he said.

Keogh has received many accolades for his kayaking/nature guide prowess, including a recent Rand McNally Editor's Award for his backcountry wilderness tours, and his tours are listed in prestigious travel guidebooks.

An avid traveler, Keogh recently returned from a month in Australia and a dive trip to the Great Barrier Reef. The reef and rainforest "provided me with rich and extensive photography opportunities," he said.

Despite his travels, he remains fascinated by his Keys home. His latest paddling guide, he said, truly reflects all the aspects that make the Keys so intriguing to him. 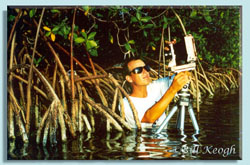 Bill Keogh, shown here immersed in his work, readies his camera for another nature shot. Photos by Bill Keogh. 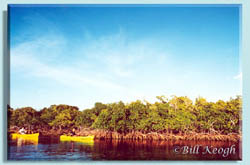 Blue skies and calm waters make the perfect setting for kayaking in the Lower Keys.

Paddlers prepare to enter the thick Florida Keys mangroves where laying down the paddle and pulling along the path by hand is a common and recommended practice. 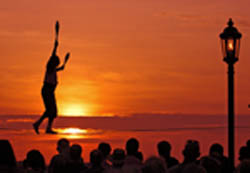 Kayakers paddle toward the sunset along tranquil Florida Keys waters.