"I have been in the Keys since August of 1967, and in October of that year I went to work for Stone Crab Inc., which was started by the folks from Joe's Stone Crab in June of 1967," said Graves. "I started out part-time and then in January 1968 I became full-time and eventually became manager of the commercial fishing operation."

From that commercial fishing operation grew the idea for a restaurant. The first step was a retail market that opened in August 2000; the restaurant debuted in November 2000.

"I have been all over the world and eaten great food, and I knew we produced great seafood and I always wanted a restaurant," said Graves.

So when Joe's Stone Crab bought more property for the operation, an on-site building became available and Keys Fisheries Restaurant was born. Graves admits he had no prior knowledge about the restaurant industry or being an owner, so he started slow and casual.

"We started hand-to-mouth with two picnic tables and a few fish sandwiches. Then we hired a chef and began evolving, and we're fortunate that we've had the same cooks and folks working in the restaurant for many years," he said.

The atmosphere is still refreshingly casual. Scrubbed picnic tables stand on an open-air patio at the water's edge, and the cry of seabirds accompanies every meal. Instead of table service, customers order their selections from a menu printed on a huge blackboard, get their own utensils and pick up their own food.

Thanks to the chefs and cooks, the menu has evolved deliciously since the restaurant's inception from a few fish sandwiches to the signature lobster Reuben and other popular favorites such as stone crab chowder, conch chowder, Key lime mahi and whisky peppercorn snapper. The recipes were concocted over the years by different chefs and cooks, including Graves' wife, Kathy. The menu now boasts about 40 items and freshness is the main ingredient.

The stone crab chowder is prepared with fresh-caught crabmeat that isn't served with the claws on the menu. The conch chowder is homemade too, and the fresh-caught, deep-water crab is served golden as an all-you-can-eat item - something Graves says no one else offers.

And although stone crab claws at most restaurants are served ice cold, Keys Fisheries can serve them hot to order during stone crab season from October to May.

"Our stone crabs are cooked to order during the season between 5 and 8 p.m., and so you're eating them hot. This is very different - unique and absolutely delicious," Graves said. "We also have the best value in stone crabs, being that we are the producer."

And the eatery's famous lobster Reuben? Graves came up with the dish after attending a meeting in Miami at Joe's Stone Crab with Chief Executive Officer Steve Sawitz, who showed him the version they make at Joe's Take Away. About five months later, Graves created an oversized sandwich at Keys Fisheries using lobster meat, homemade Thousand Island dressing and freshly baked bread.

"Being such a huge producer of lobster as well as stone crabs, we have leftover meat from the lobster tails," he said. "So it dawned on me, why not make our own lobster Reuben?"

Like savoring the lobster Reuben, ordering at Keys Fisheries is a unique dining experience. Customers walk up to a window and place their order for pickup. But instead of being asked their name, as in most establishments, they're asked the question of the day, which might require them to name their favorite song title, pet peeve or New Year's resolution.

When the order is ready, the customer's answer is announced over the loudspeaker to signal that it can be picked up.

The system fits well with Graves' philosophy of "making his customer's meal a good value, and also making dining at Keys Fisheries fun." 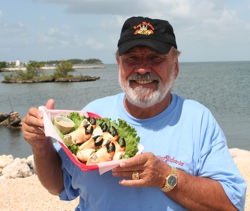 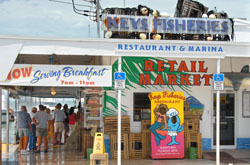