KEY WEST, Florida Keys - The colorful history of Key West incorporates shipwreck treasures and artifacts, renowned artists, literary legends, a cigar-making heyday and a vibrant past as a bustling seaport. The area's historic and cultural richness is preserved, spotlighted and celebrated in the island city's many museums.

For example, Key West is home to the Mel Fisher Maritime Museum, founded by the legendary shipwreck salvor who died in 1998. The museum holds the richest single collection of 17th-century maritime and shipwreck antiquities in the Western Hemisphere - most of them excavated from the waters around the island city.

Visitors can view gold, silver, emeralds and priceless artifacts from the shipwrecked Spanish galleons Nuestra Señora de Atocha, wrecked off Key West in a 1622 hurricane and discovered by Fisher in 1985 after a 16-year search, and Santa Margarita. History fans can even hold in their hand a gold bar found on one of the wreck sites.

Also on display are artifacts from the English merchant slave vessel Henrietta Marie, which sank in 1700 near the Marquesas Keys and was salvaged by Fisher's crew. In addition, a second-floor gallery hosts a new maritime exhibition each year. Located at 200 Greene St., the museum is open from 9:30 a.m. to 5 p.m. daily. For more information, call (305) 294-2633 or click here.

Just a few steps away stands another structure commemorating a historic highlight: the period in 1832 when artist and ornithologist John James Audubon visited Key West and the Dry Tortugas, sighting and drawing 19 new species for his monumental "Birds of America" folio. It is believed that many of those detailed paintings were conceived in the garden of the 205 Whitehead St. property now known as the Audubon House & Tropical Gardens.

The gardens surrounding the Audubon house, encompassing nearly an acre, contain a breathtaking variety of tropical foliage, native plants and exotics. In the front yard stand three Geiger trees - one of which appears in Audubon's painting of the white-crowned pigeon.

Key West's Cuban heritage is represented by the San Carlos Institute, 516 Duval St. An affiliate to the Smithsonian Institution, the San Carlos was founded in 1871 to preserve Cuban culture and promote the freedom of Cuba. In 1892, it was from the institute that Cuban patriot José Marti united exiles for his drive for Cuba's independence.

Key West's literary history is showcased at the Key West Heritage House Museum and Robert Frost Cottage, 410 Caroline St. Once the home of Key West hostess and preservationist Jessie Porter, the Heritage House contains hundreds of mementos from Key West's early days, when shipwreck salvaging made it the richest city per capita in the United States.

Visitors learn about the property's role as a gathering place for literary luminaries including Thornton Wilder, Tennessee Williams, Elizabeth Bishop and Frost. The cottage on the grounds, where Frost stayed during his 1945-1960 winter sojourns in Key West, is now a National Literary Landmark. The Heritage House Museum is open from 10 a.m. to 3 p.m. Monday, Tuesday and Thursday through Saturday. For more information, call (305) 296-3573 or click here.

A few blocks away stands the Key West Shipwreck Historeum, 1 Whitehead St., dedicated to aspects of the wrecking or shipwreck salvage industry that was the cornerstone of the island's early economy. The museum combines actors, films, laser technology and actual artifacts from the shipwrecked Isaac Allerton, which sank in Keys waters in 1856.

Historeum visitors meet Asa Tift in his 1856 wreckers' warehouse, enjoy a fascinating video on the wrecking industry and hear tales from the families who made their fortunes in wrecking. Those who climb to the top of the 65-foot observatory can even scan the reefs for wrecks just as Key West's 19th-century captains did. The Key West Shipwreck Historeum is open from 9:45 a.m. to 5 p.m. daily. For more information, call (305) 292-8990 or click here.

Prior to the wrecking era, the Florida Keys waters were pirate territory. The lives of the world's most notorious buccaneers are explored through artifacts and audio-animatronic elements in the 5,000-square-foot Pirate Soul Museum, 524 Front St. The museum features nearly 500 authentic artifacts depicting piracy's golden age from 1690 to 1730, many from the collection of founder Pat Croce.

The museum's highlights include the world's only authenticated pirate treasure chest and one of two authenticated pirate flags. Visitors also can view the original journal of Captain Kidd's last voyage, a blunderbuss owned by Blackbeard, rare pirate gold and weapons - and explore a re-created pirate haven and a ship during a simulated buccaneer attack.

The Truman era in Key West is showcased at the Harry S. Truman Little White House Museum, 111 Front St. on Truman Annex. Truman, who visited Key West 11 times during his presidency, liked the island so much that he once wrote his wife, "I've a notion to move the capital to Key West and just stay." The Navy base's commandant's quarters, a roomy West Indian structure, became his Little White House.

Nearby, at 938 Whitehead St. stands the Key West Lighthouse Museum & Keeper's Quarters. Completed in 1847, the lighthouse guided mariners through the treacherous Key West waters until it was decommissioned in 1969. Today both the light and the Keeper's Quarters have been restored by the Key West Art & Historical Society to show visitors what life was like for a lighthouse keeper in the days before electricity and automation.

Visitors can climb an 88-step circular staircase to the historic lighthouse deck for a panoramic view of Key West, view a 12-foot "first order" lens circa 1858, learn the stories of two courageous female lighthouse keepers and observe historic artifacts, photos and journals.

Also operated by the Key West Art & Historical Society is the East Martello Museum & Gallery, 3501 S. Roosevelt Blvd. Housed in a Civil War-era fort, the museum showcases the art and history of the Florida Keys. Items on display include ship models, Civil War and naval artifacts, shipbuilding tools and relics from the Keys' sponging, shrimping, cigar-making and turtling industries.

Visitors also can view the sculptures of Stanley Papio and the colorful primitive woodcarvings and paintings of Mario Sanchez. The East Martello Museum & Gallery is open from 9:30 a.m. to 4:30 p.m. daily. For more information, call (305) 296-3913 or click here.

The Custom House building has been designated one of Florida's most unique architectural structures. Past and ongoing exhibitions at the museum include "Remember the Maine," focusing on the battleship Maine and its role in the Spanish-American War; photographic, artistic and oral history retrospectives of Key West and its residents; a look at Ernest Hemingway and his Key West contemporaries; and documentary photographs depicting Cuba and its people.

People can learn about turtles and their preservation, and Key West's turtling industry, at the Turtle Kraals Museum at 200 Margaret St. in the island's Historic Seaport district. The museum sits on a former waterfront cannery next to the one-time turtle holding pens or kraals, and features photographs and a brief history of Key West's 19th-century turtling industry. Highlights include educational information about sea turtles and the modern-day perils they face.

The Key West Lighthouse Museum offers a glimpse of the lives of the island's early lighthouse keepers -- and a panoramic view from the top of the historic light. 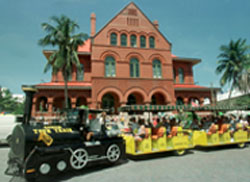 The acclaimed Key West Museum of Art & History is located in the restored custom house overlooking the waters plied by early mariners. 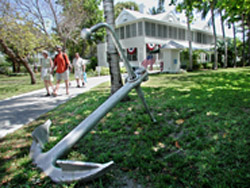 Key West was a national government center when Harry Truman spent working vacations during his presidency at the structure that became known as the Little White House. 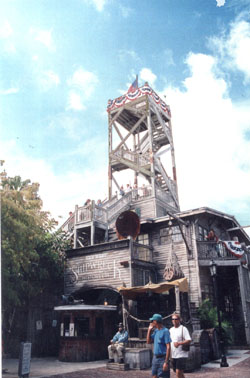 At the Key West Shipwreck Historeum, re-enactors transport visitors back in time to learn about the wrecking industry that flourished in the island's early years. 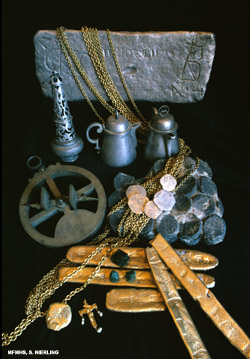 Highlights of the Mel Fisher Maritime Museum's collection include artifacts and treasures from two Spanish galleons sunk in Keys waters during a 1622 storm.