Key West in the Florida Keys is planning a range of activities throughout 2022 to highlight the 200th anniversary of the island’s first permanent settlement on 25 March 1822.

On this date, U.S. Navy Lt. Matthew Perry planted the American flag on island soil when he arrived to physically claim the Florida Keys as U.S. territory by orders of the Navy. The islands’ strategic location guarded the northern edge of the Florida Straits, the deep-water route between the Atlantic Ocean and Gulf of Mexico.

Key West 200th will run 19-30 March with activity highlights set to include:

20 March: The Key West Maritime Historical Society will present Perry’s original logbook for permanent safekeeping at the Monroe County Public Library’s Florida History Department in the island city. This details his voyage to the island on the U.S.S. Shark. The ceremony is scheduled for 4pm and will take place aboard the Coast Guard Cutter Ingham Maritime Museum, a national historic landmark.

22 March: History fans can enjoy a free outdoor screening at Fort East Martello Museum of the documentary, ‘Key West: Come as You Are: 200 Years of History and Culture.’

25 March: A re-enactment of Perry’s planting of the American flag is scheduled at 2pm. Taking place at Mallory Square beside Key West Harbor, activities will include the dedication of a granite time capsule to be opened in 50 years and the designation of four Key West children to be ambassadors at the island’s 250th anniversary celebration. A parade along historic Duval Street is to follow. That night, the Old Island Restoration Foundation is to host the Key West Bicentennial Celebratory Gala at the Oldest House Museum and Gardens on Duval Street. Attendees are encouraged to dress in period or ‘island formal’ attire to enjoy the gala’s music, artifact displays, VIP guest speakers, light fare, and libations.

Throughout March, baseball fans can celebrate Key West’s longstanding connection to the sport by viewing ‘Play Ball!,’ a multivenue exhibit of 200 artist-decorated baseball bats held at the Studios of Key West, the Historic Gato Building, and the Oldest House Museum.

The bicentennial celebration will continue to be commemorated all year in the ‘Key West 200’ exhibit at the Key West Art & Historical Society’s Custom House Museum. Running until 11 December, the exhibit showcases rarely displayed artifacts from the island’s industries and commerce, migrations, transportation and architecture, culture and community, as well as influential milestones such as the Civil War, Great Depression and World War II. 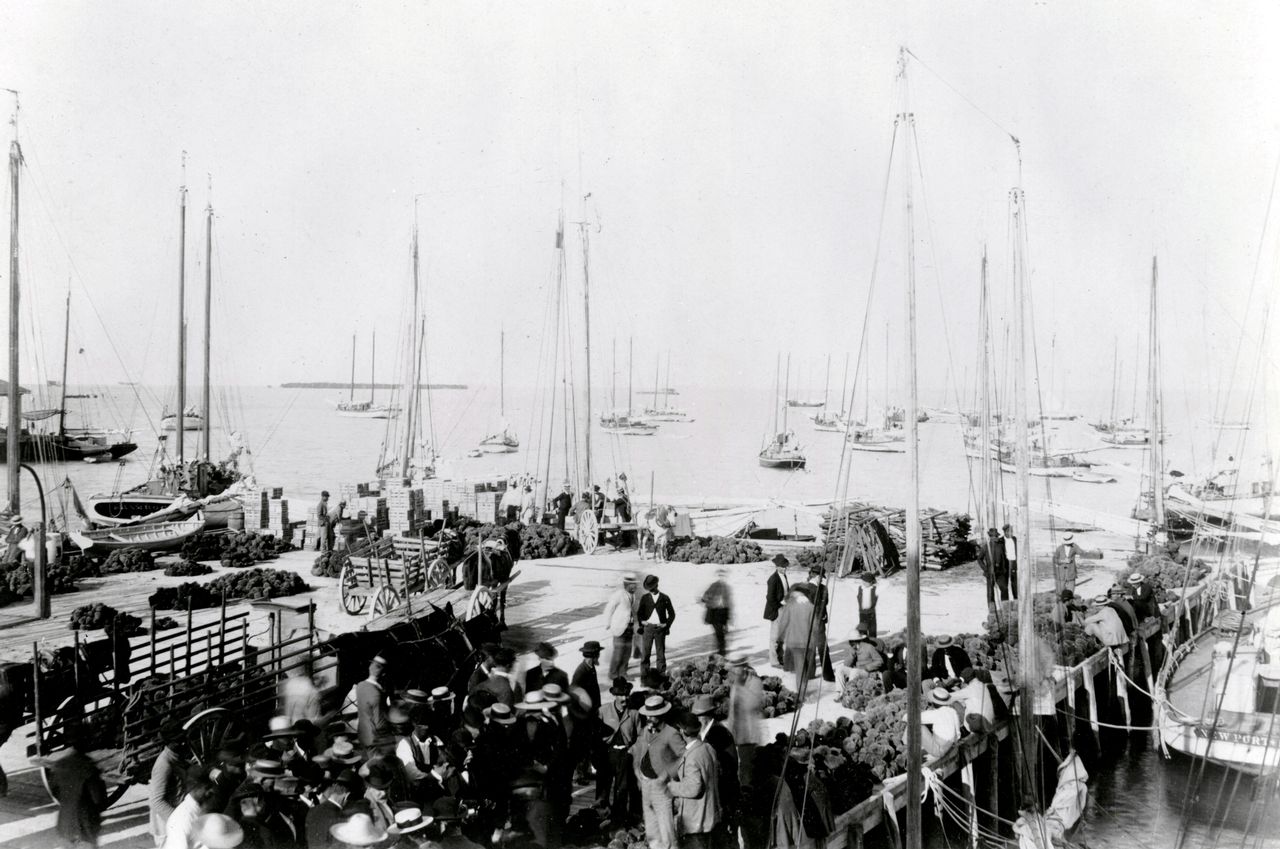 Sponge sale on the dock of the Key West Bight at the foot of Elizabeth Street, c.1890. Photo: Key West Art & Historical Society