The father and daughter amassed 1,000 points for the releases, capturing the title of divisional grand champion team in the tournament that ended Jan. 30 in the Lower Florida Keys. The duo also was named grand champion in the youth division.

“She’s nine years old and she beat all the big boys,” said Pat Bracher of his daughter. “Our goal was to catch a barracuda as quick as we could, because they were going to be easier, and then try for bonefish and permit after that.”

In the fly division, guide Nick LaBadie and anglers Nathaniel Linville and Brandon Cyr, all of Key West, Florida, released five barracuda and five bonefish to earn 1,000 points and the divisional championship.

The runner-up team in the spin division consisted of guide Doug Kilpatrick of Key West and angler David Leider, who lives in Miami. The duo released six barracuda and two bonefish, ending the showdown’s two fishing days with 800 points.

Fly division runner-up was the team of guide Lenny Leonard of Key West and angler Mike Widdes of Chicago, Illinois, who earned 800 points for releasing five barracuda and three bonefish.

Second runner-up awards went to guide Tim Carlile of Sugarloaf Key and angler Pat Bennett in the spin division, who ended the tournament with 700 points; and guide Nick Calabro of Key West and angler Rob Kaufman in the fly division with 600 points.

Postponed from November 2020 because of inclement weather, the challenge drew 63 participants on 28 boats. It was presented by the Lower Keys Guides Association to raise money for the Florida Keys Guides Trust Foundation, which provides funds to assist fishing guides who are recovering from an illness or injury. 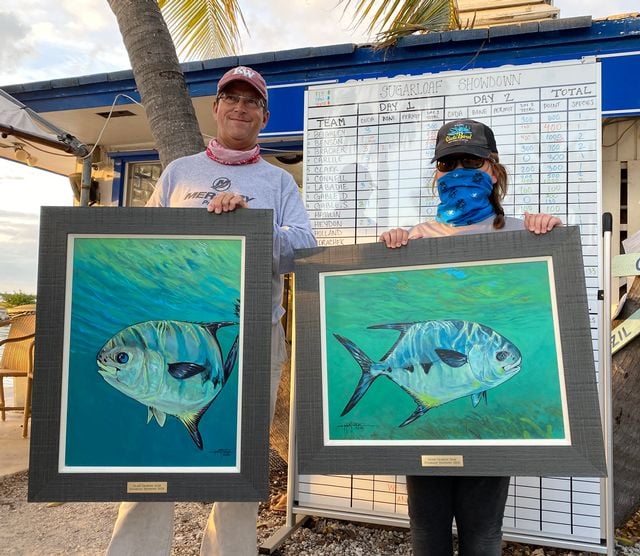