KEY WEST, Fla. — The Cow Key Channel Bridge, stretching about 300 feet between Key West and neighboring Stock Island, is among the shortest of the Florida Keys Overseas Highway’s 42 bridges. Yet Saturday, Feb. 29, it will become the site of a quirky “zero k race” for people who want to compete in an “athletic” challenge without breaking a sweat.

Hundreds of intrepid entrants typically take part in the family-friendly annual race, including many wearing cow or bull costumes inspired by the name of the bridge.

Some bring their dogs or other domestic animals, though actual bovines are not allowed. In past races, even participating canines sported black-and-white cow costumes.

Racers are encouraged to move at their own pace and clock their own times as they travel the “grueling” distance. Separate heats are staged for competitors with pets, relay teams and people vying to post the slowest possible time.

“Bring your cowbell — this is a true Key West ‘bucket list’ event,” said race co-producer David Sloan. “All jesting aside, the event promotes pure fun for anyone who wants it.”

Participants in the 2020 race are to gather beginning at 10 a.m. in the “pasture” at the entrance to Key West for “grazing,” final registration, race packet pickup and costume judging.

The opening ceremony is scheduled for 11:45 a.m., followed at noon by the ringing of cowbells to start the stampede across the bridge.

Participants race on the Overseas Heritage Trail beside the bridge so vehicular traffic is not disrupted. A water station at the halfway point encourages “athletes” to stay hydrated.

Following the race, entrants are to join the “Absurd Herd Parade” to a post-race party and awards presentation at Sunset Green Event Lawn beside the 24 North Hotel at 3820 N. Roosevelt Blvd. The coveted “Golden Calf” awards will be presented to winners in multiple categories — including one to a “random crazy person.”

Entry in the cow-themed challenge is $10 per person and includes a souvenir race bib. A portion of proceeds is donated to the Monroe County Sheriff's Animal Farm. 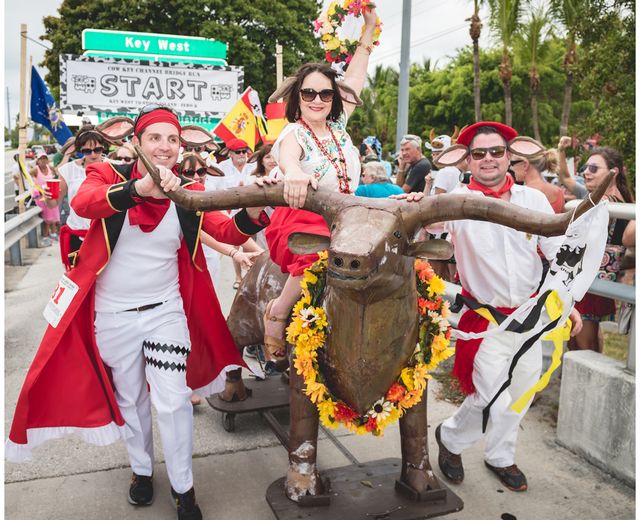 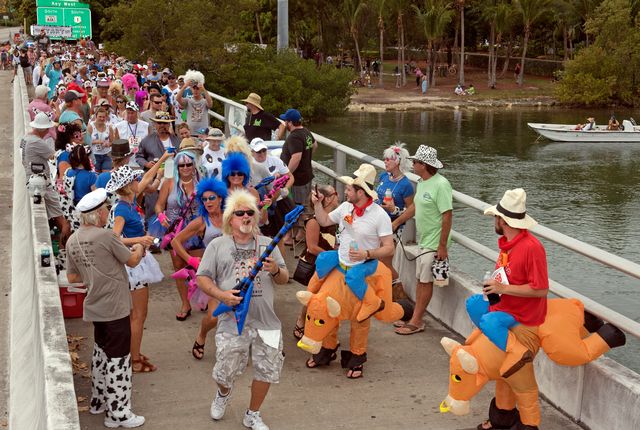