5 August 2019: The Florida Keys have long been a popular choice for Hollywood producers looking for a subtropical adventure setting for their next big project, meaning that the island chain has served as the backdrop for a number of popular movies and TV shows since the late 1940s.

In recent years, the trend for tourism motivated by TV and movies has grown so significantly that this type of travel now has its own name – set-jetting – and, according to TripAdvisor, one in five global travellers have been on this type of holiday.

Inspired by the growth in popularity of ‘set jetting’, here are some of the films and TV shows shot on location in the Florida Keys together with ideas on how visitors can follow in the footsteps of their favourite Hollywood stars from the big and small screen when visiting the island chain.

Key Largo: On arrival in the Florida Keys, visitors first come to Key Largo, the island chain’s most northerly district. It was here that Hollywood greats Humphrey Bogart and Lauren Bacall filmed part of the movie of the same name back in 1948. Today, visitors can stop by The Caribbean Club in Key Largo to see one of the filming locations from the movie. Dating back to 1938, it’s the oldest bar in the Upper Keys, and a true relic of Old Key Largo.

Close by, Bogart fans can also take a trip on the fully restored and original African Queen boat which featured in the Bogart movie of the same name. Added to the U.S. National Register of Historic Places in 1992, the iconic steamboat operates daily sightseeing cruises along the Port Largo Canals from Marina Del Mar in Key Largo. 90-minute canal cruises are priced from $49 (approximately £40). Dinner cruises taking in a stop at the Pilot House Marina and Restaurant are also available from $89 (around £73). For their own moment in the spotlight, visitors can ask the captain for their turn at the helm.

The Rose Tattoo: Anna Magnani won the Academy Award for Best Actress for her performance in the movie, which was set in Louisiana but actually entirely filmed in Key West. Visitors spending time set-jetting in the island city should stop by the Rose Tattoo House which still stands at the corner of Pearl and Duncan Streets. It is said that author Tennessee Williams would often visit the house during filming because he lived close by. The film was based on his play of the same name. Williams lived in Key West for more than 30 years.

While in Key West, film buffs might like to consider a stay at Oceans Edge Resort & Marina on nearby Stock Island as this property – which opened in January 2017 – was used in the filming of both Meryl Streep’s The Laundromat and also Matt McConaughey’s movie The Beach Bum.

Licence to Kill: Celebrating its 30th anniversary this year, this James Bond movie starring Timothy Dalton sees 007 relinquish his licence to kill, disobey his orders and embark on a revenge mission. The notorious opening scene takes place on the Seven Mile Bridge with other segments filmed at Key West International Airport and on Whitehead Street at the Key West Lighthouse and Ernest Hemingway Home & Museum. Set jetters should add a visit to the Hemingway property to their bucket list and look out for the 40-50 polydactyl cats that live on-site. Tours are priced from $14 (approximately £11.50).

True Lies: A James Cameron epic, this mid-90s Hollywood blockbuster starred Arnold Schwarzenegger, Jamie Lee Curtis, Bill Paxton and Tom Arnold. Featuring action sequences of helicopter stunts, a warehouse explosion and bridge blast, parts of the movie were filmed on sets constructed on Sugarloaf Key to replicate the iconic Seven Mile Bridge that runs between Knight’s Key in the Middle Keys and Little Duck Key in the Lower Keys. Additional scenes were also filmed in the cities of Marathon and Key West. For visitors road-tripping the Keys, it’s a must to drive the Overseas Highway and cross the real Seven Mile Bridge.

2 Fast 2 Furious: Featuring Eva Mendes, Ludacris and the late Paul Walker, this action-packed movie also filmed in part in the Florida Keys, opting like many others to shoot adrenaline-pumping scenes on the Seven Mile Bridge.

Bloodline: Most recently Netflix’s popular psychological thriller was filmed in the Keys and debuted in 2015. Starring Kyle Chandler and Ben Mendelsohn, the series was set and shot in Islamorada in the Upper Keys and paints a compelling picture of the island chain. Visitors keen to see notable locations from the series should consider a stay at The Moorings Village as the luxurious resort is home to an idyllic cottage which served as the protagonists’ family home. Key Largo’s Playa Largo Resort and Islamorada’s Cheeca Lodge & Spa also served as filming locations. The series follows the life of the Rayburns, hard-working members of their Florida Keys community, who harbour dark secrets. ‘Set jetters’ should also drive across the Overseas Highway, which featured in the opening sequence of the pilot episode, enjoy a refreshing beverage at the Morada Bay Beach Café in Islamorada, a familiar setting throughout the series, and stop by Anne’s Beach.

For foodies set-jetting their way around the Keys, there are plenty of taste sensations to be enjoyed as featured on popular culinary shows:

Man v. Food Nation: Host Adam Richman headed to the Florida Keys in 2011 and visited Stock Island staple, Hogfish Bar & Grill to tackle their Killer Hogfish Sandwich, an 8-ounce piece of fried hogfish topped with swiss cheese, sautéed mushrooms, onions and lettuce. For afters, Richman was joined by musician and Florida resident Vanilla Ice at Key West institution Blue Heaven to taste the historic spot’s towering meringue-topped Key lime pie. Added to this, the episode also features a food challenge that sees Adam visit the Key Largo Conch House and coach a local underdog during the restaurant’s Conch Republic Fritter Contest. The conch fritter is a Florida Keys speciality and contestants were required to eat as many as possible in 15 minutes.

Diners, Drive-Ins and Dives: Show host Guy Fieri has visited a wide range of Keys eateries while filming the show. These include Garbo’s Grill, DJ’s Clam Shack and Bad Boy Burrito in Key West; The Fish House and Pilot House Marina & Restaurant in Key Largo and Green Turtle Inn in Islamorada to name but a few.

For more information on productions shot on location in the Florida Keys, visit: www.fla-keys.com/movies-tv and www.filmkeys.com/past-productions.cfm 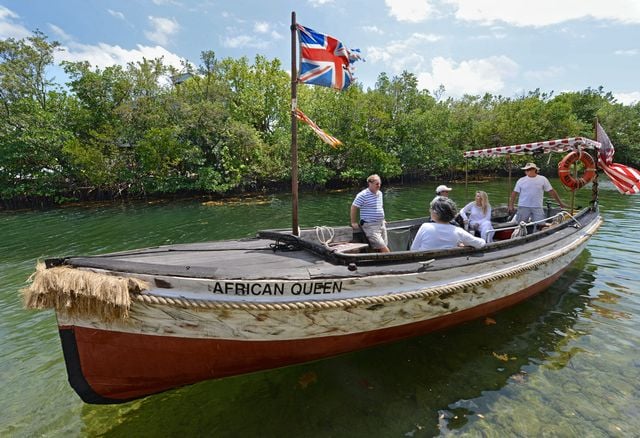 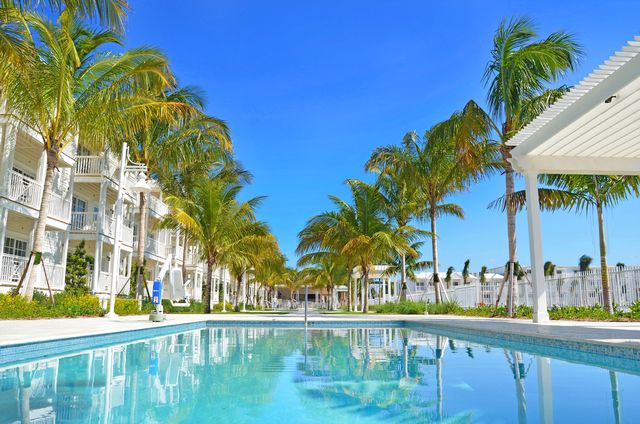 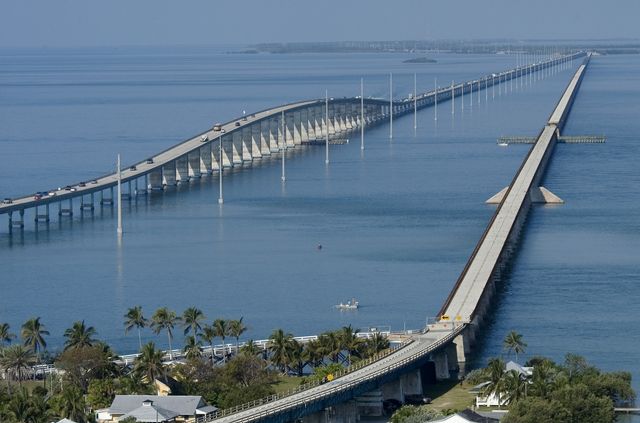 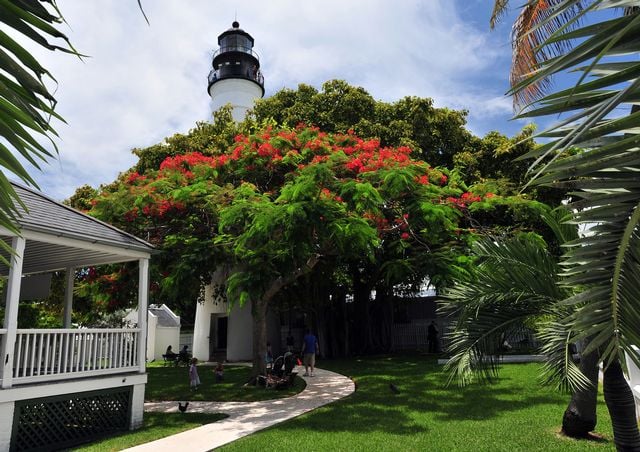 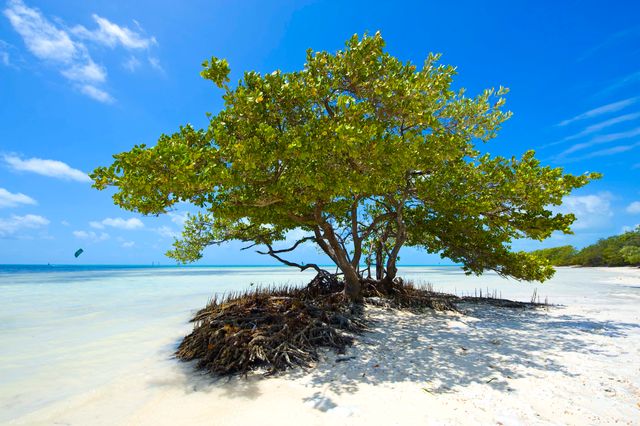 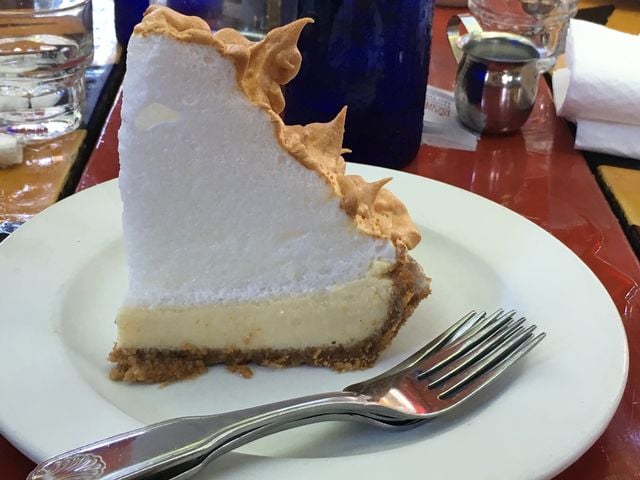