KEY WEST, Florida Keys — For more than three-quarters of a century, Key West has been a haven and an inspiration for some of the United States’ most influential writers. While the late Ernest Hemingway, Tennessee Williams and Robert Frost no longer stroll the streets, visitors can view a wealth of literary landmarks and sites that recall their presence and showcase the island’s importance in the literary world.

Hemingway lived in Key West throughout the 1930s, and Williams called the island home from the late 1940s until his death in 1983. Poet Frost wintered at a small Key West cottage from 1945 to 1960.

Ernest Hemingway was the first popular author to make Key West his home, and a wealth of sites are associated with his decade-long presence. Among them is Casa Antigua, 314 Simonton St., where he stayed during his initial 1928 visit. Fortuitously delayed on the island because an expected automobile had not been delivered, he worked on “A Farewell to Arms” while residing at the onetime Trevor and Morris Apartments above the dealership. The property was later transformed into a distinctive private home with a spectacular atrium garden.

The best-known Hemingway heritage site is the Spanish colonial villa at 907 Whitehead St. where he lived through December 1939. Now a registered National Historic Landmark, it is open to the public as the Ernest Hemingway Home & Museum. Its notable features include the island’s first swimming pool and a colony of cats, many of them six-toed, that are supposedly descended from a sea captain’s feline given to the author.

Hemingway wrote many of his classic works in the second-story studio that adjoins the Whitehead Street house. Among them were “Death in the Afternoon,” “For Whom the Bell Tolls,” “The Snows of Kilimanjaro” and “The Short Happy Life of Francis Macomber.” He used Depression-era Key West as the locale for “To Have and Have Not” — his only novel set in the United States.

Many Hemingway aficionados visit the onetime Key West Arena, located at the corner of Thomas and Petronia streets in Bahama Village, the site of open-air neighborhood boxing matches that Hemingway often refereed. Today the popular Blue Heaven Restaurant, where the food is “Caribbean casual,” is located at the former arena site.

Internationally renowned playwright Tennessee Williams discovered Key West not long after Hemingway’s departure. Williams first visited Key West in 1941 and returned several times — completing “Summer and Smoke” on the island in 1946 — before his 1949 purchase of the unpretentious 1431 Duncan St. house that would become his home for the rest of his life.

The red-shuttered house, still standing on a quiet, tree-lined street, is privately owned and is not open to the public. Many literary buffs pass by the site in homage to Williams, who wrote “Night of the Iguana” in Key West, among other works. The Academy Award–winning film version of his “The Rose Tattoo” was shot on the island in 1956.

In 2013, a unique exhibit debuted honoring Williams’ literary prowess and Key West years while exploring his motivations, beliefs and legacy. Located at 513 Truman Ave., it subsequently expanded to become the Tennessee Williams Museum following a merger with the Key West Art & Historical Society.

Highlights include personal photographs of the playwright at home with his partner and friends, first-edition plays and books, a typewriter used by Williams when he lived in Key West, an artist-crafted model of his island home and even the original steps from the film adaptation of Williams’ play “The Rose Tattoo.”

In addition, the multiweek Tennessee Williams Birthday Celebration is held each spring to pay tribute to his life and work.

Fans of Williams’ masterful plays should also note the Tennessee Williams Theatre, located at 5901 College Road on the campus of Florida Keys Community College. The theater has borne Williams’ name since it opened in 1980 with the world premiere of his play “Will Mr. Merriweather Return From Memphis?”

Robert Frost, who served as U.S. poet laureate in 1958-59, first visited Key West in 1934 and wrote one of his best-known poems, “The Gift Outright,” on the island. He paid winter visits to Key West from 1945 to 1960, staying in a small cottage behind the home of local hostess and preservationist Jessie Porter. Porter’s home and the cottage, which has been named a National Literary Landmark, still stand at 410 Caroline St.

As well as at these sites, Key West’s literary heritage can be recalled at popular hotels and resorts. The Casa Marina Resort, located on the island’s Atlantic Ocean shore at 1500 Reynolds St., was a favorite haunt of Frost and Wallace Stevens. Tennessee Williams and his grandfather Dakin stayed at the 430 Duval St. hotel that is now the Crowne Plaza La Concha, and Williams wrote in a sixth-floor room with a view of Key West rooftops.

Many of Key West’s most significant literary landmarks, however, are private homes on quiet lanes whose placid exteriors give no hint of their place in the world of letters.

For example, Philip Caputo, who wrote the Viet Nam War classic “A Rumor of War,” lived in a historic pink stucco edifice at 1101 Casa Marina Court and frequented the one-time Full Moon Saloon. Pulitzer Prize–winning poet Elizabeth Bishop lived quietly at 624 White St. from 1938 to 1946. James Leo Herlihy, renowned as the author of “Midnight Cowboy,” owned a cottage at 709 Baker’s Lane where he worked on “Season of the Witch.” Thomas McGuane, known for his “92 in the Shade” and “Panama,” resided at 123-125 Ann St., 1011 Von Phister St. and 416 Elizabeth St.

Poet James Merrill, who earned a Pulitzer and two National Book Awards, lived at 702 Elizabeth St. in a house that was built in the Bahamas and later barged to Key West. A group of houses set behind a white stucco wall, known as the Windsor Lane Compound, became home to a celebrated coterie: Pulitzer Prize–winning poet Richard Wilbur; John Hersey, author of “A Bell for Adano” and “Hiroshima”; poet, lecturer and “Divine Comedy” translator John Ciardi and Ralph Ellison, who wrote “The Invisible Man.”

Even the hangouts of songwriter Jimmy Buffett should be considered among Key West’s literary landmarks. The multitalented Buffett, author of “Where is Joe Merchant?” and “A Pirate Looks at Fifty” among others, was only the sixth author ever to top the New York Times Best Seller List in both fiction and nonfiction. Buffett, whose original Margaritaville Store and Margaritaville Café are located at 500 Duval St., lived in numerous Key West abodes including a sprawling home at Alberta and Waddell streets — now part of the Coconut Beach Resort. His recording studio stands, unmarked and anonymous, in the island city’s Historic Seaport.

Each January, Key West’s literary heritage, and continued role as home to world-renowned writers, is celebrated with the Key West Literary Seminar. 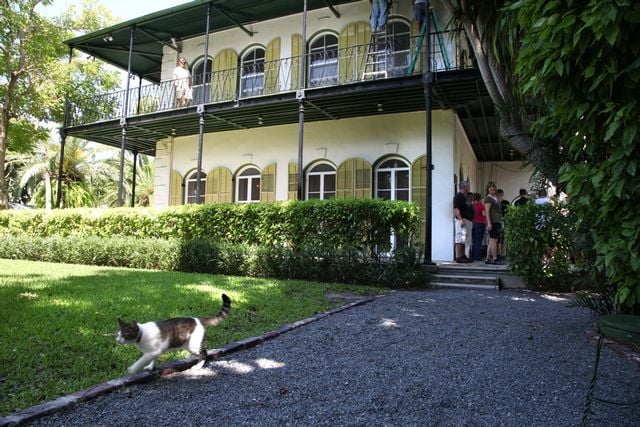 The best-known Hemingway heritage site is the Spanish colonial villa. Now a registered National Historic Landmark, it is open to the public as the Ernest Hemingway Home & Museum. 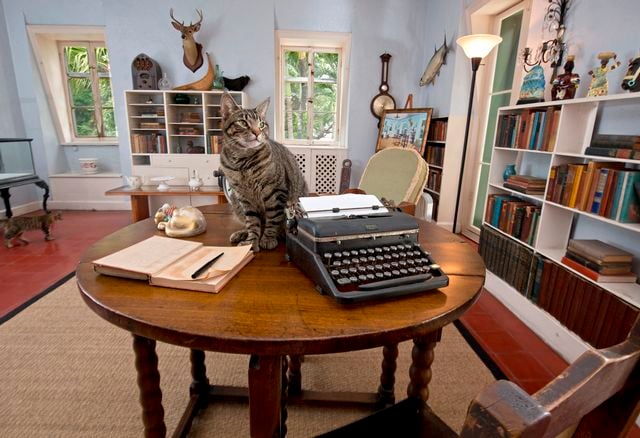 Hemingway wrote many of his classic works in the second-story studio that adjoins the Whitehead Street house. Image: Rob O'Neal 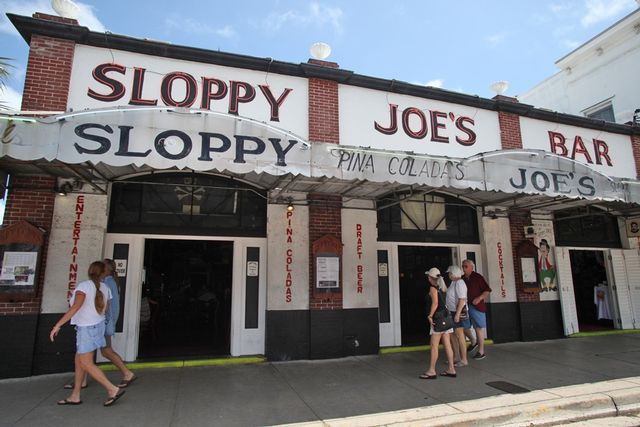 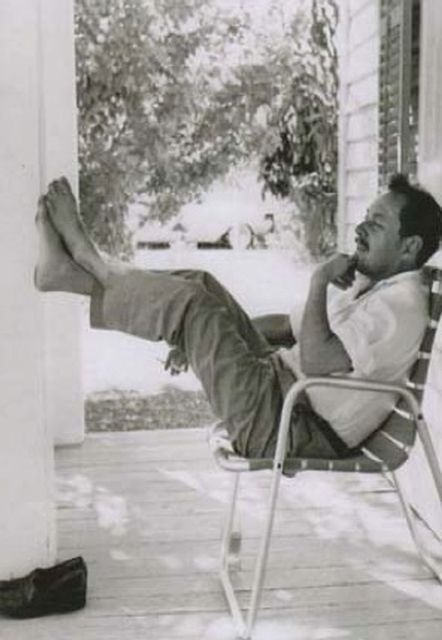 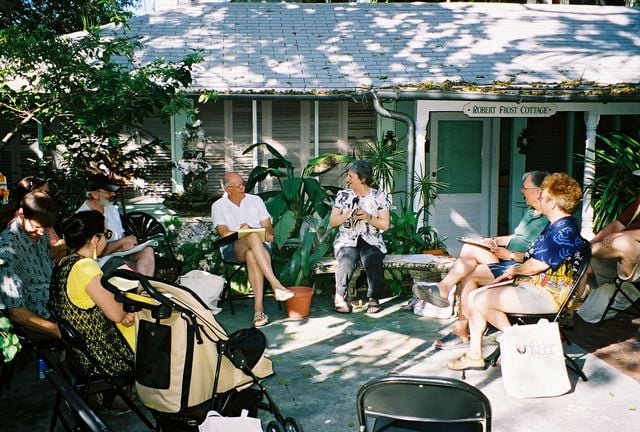 Poet Robert Frost, paid winter visits to Key West from 1945 to 1960, staying in a small cottage behind the home of local preservationist Jessie Porter. 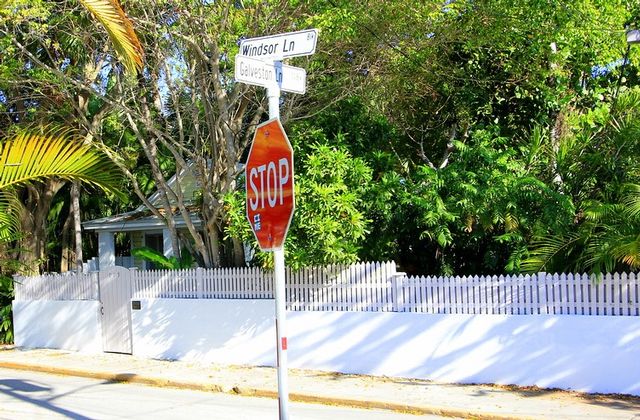 A group of houses set behind a white stucco wall, known as the Windsor Lane Compound, became home to a celebrated coterie of writers.