Thirty-One Years of the Conch Republic

Some people, whether kids or seniors, don’t realize the significance of the date April 23, 1982, to Key West and the Florida Keys. But believe me, the date was, (and still is!) supremely significant. That’s the day the island chain seceded from the union and formed the Conch Republic. 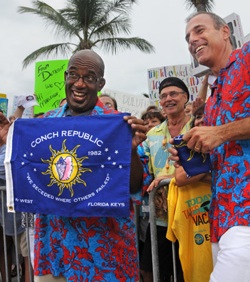 Seems the U.S. border patrol was determined to apprehend illegal immigrants entering the United States through the Keys. So they set up a roadblock at the junction of U.S. 1 and Card Sound Road in Florida City. Inspection of every car took time and resulted in a humongous traffic jam from Florida City to Key Largo. As a result, the tourism industry suffered a blow that could have been devastating. The powers that be in the Keys were not amused — in fact, they were incensed and protested vehemently.

Secession was only undertaken after all other attempts to relieve the situation failed. But on April 23, Key West and the Florida Keys staged a ceremonial secession from the union and named themselves the Conch Republic. The well-attended event was held on Front Street adjacent to Key West’s popular Mallory Square.

The late Wilhelmina Harvey, then an active 70-year-old and mayor of Monroe County, was appointed Admiral of the Conch Republic Navy. Other officers included attorney David Paul Horan as Secretary of the Air Force, and then-Key West mayor Dennis Wardlow as Prime Minister. War was declared against the United States, and shots of stale Cuban bread were fired at the U.S. Navy (which still has a base here). 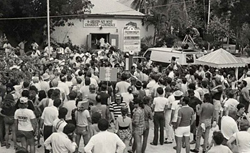 In 1982, hundreds gathered to watch the historic secession ceremony and birth of the independent Conch Republic.

The Conch Republic surrendered, and immediately requested foreign aid. Additional officials were appointed ambassadors to such places as Miami, Texas, and Hawaii. Soon citizens of the Conch Republic even had border passes and passports.

No foreign aid was forthcoming, but the border patrol realized the embarrassing situation it had created and removed the blockade. Once again tourism flourished. Of course, because Keys residents love any kind of festival, Conch Republic Days became an annual celebration.

In 1990 Captain Tony Tarracino, another active senior citizen and mayor of Key West, appointed Peter Anderson the official Secretary General of the Conch Republic, a post he holds to this day. The festival was renamed the Conch Republic Independence Celebration, and businesses in the downtown area enthusiastically hosted zany events, such as a bed race down Duval Street.

Among the festival highlights is the great battle for the Conch Republic, when Key West’s tall ships fire water balloons and other offbeat “weapons” at Coast Guard vessels. The battle is led by Finbar Gittelman, current Admiral and First Sea Lord of the Conch Republic, another senior who is the real-life captain of the Schooner Wolf.

The Conch Republic still issues passports (years ago, Secretary General Anderson even used his when traveling). The tiny “fifth world nation” has its own flag, too, that can be seen flying from homes and businesses all over town.

Key West is noted for its unique attitude and lifestyle. And in Key West, age is a state of mind. So, seniors, secede from your usual activities and join in the celebration of the Conch Republic — set this year for April 19-28. You’ll have a rollicking good time!