Key Largo is the northernmost gateway to the Florida Keys. Known as the dive capital of the world, it earns raves from underwater enthusiasts for its colorful reefs and marine life — but it’s sometimes under-appreciated by visitors who prefer dry land. 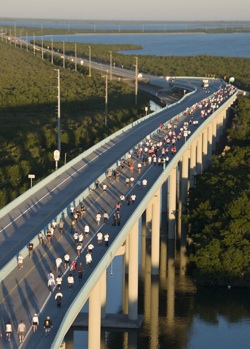 As well its local landmarks and world-class diving, Key Largo is known for a popular annual run over one of its breathtaking bridges. (Photo by Andy Newman, Florida Keys News Bureau)

No wetsuit, no mask, no boat? No problem! Key Largo is filled with unforgettable local hangouts for those who want to keep their heads above water.

Begin by taking the road less traveled — Card Sound Road, where attractions include Crocodile Lake National Wildlife Refuge, lush plant life and the infamous Alabama Jack’s. Since 1947, this open-air rustic restaurant and watering hole has been a Keys favorite for everyday pirates and bikers … and celebrities like Billy Joel, Jimmy Buffett and others.

What began as a rough biker bar has evolved into a family-owned and operated place that boasts a diverse crowd, attentive service, fresh homemade food and good times. Since the Saguer family purchased Alabama Jack’s in 1981, they’ve offered live entertainment every weekend by the Card Sound Road Machine and their clog dancers. 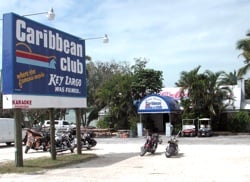 Key Largo's Caribbean Club is famed as a location for the 1948 movie classic that shares a name with the Keys' gateway island.

A fabulous next stop is the Key Largo Conch House for a fresh cup of java and a bite of award-winning lobster and conch ceviche. Tucked away behind a leafy hammock near mile marker (MM) 100, the Conch House features designer coffee blends from Costa Rica and a full menu of locally acclaimed dishes.

It’s been showcased on the Food Network as a quaint, off-the-beaten-path place to eat — and no wonder. This peachy little home is ideal for a quiet family outing or a cup of tea in the garden. It’s also family-owned and operated as an eco-friendly restaurant that incorporates almost exclusively local ingredients in its dishes.

When you arrive, you’ll probably be greeted by Romeo the parrot. According to owner Laura Dreaver, they purchased Romeo because “in the Keys we’re all pirates and walk around with our parrots.” 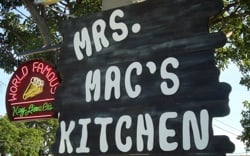 Mrs. Mac's Kitchen is rightfully renowned for its Key lime pie and other yummy homemade dishes.

Parrots and pirates are certainly appropriate at the Caribbean Club, MM 104. This local watering hole, made famous as a location for scenes in the 1948 movie classic “Key Largo,” has been a Keys landmark for decades. You’ll find Harleys lined up outside, rickety boats tied up at the dock and (of course) cold beers in the ice chest.

Key Largo is also home to Mrs. Mac’s Kitchen, where the sign reading “World Famous Key Lime Pie” is NOT an exaggeration. The pie is a delicious blend of sweet and tart goodness in a thick graham cracker crust.

Founded in 1976, this Keys favorite was named for the mother of original owner Jeff MacFarland in honor of her recipes. 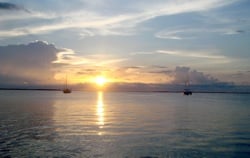 When the day's exploring is over, nothing beats a Key Largo sunset over the water.

Since sisters Angela and Paula Wittke purchased the restaurant in 1987, they have run it by a simple motto: “Eat Well, Laugh Often, Live Long.” The tiny eatery is decorated with wall-to-wall license plates donated by guests who want to leave their mark on the place.

All dishes and sauces are homemade-from-scratch with Keys flair, and owners and staff display a lively sense of humor.

“When they ask us if we serve crabs, we tell them we’ll serve anybody,” Angela Wittke said.

From Clubs to Cruises, Entertainment Abounds in Key West