Robert the Doll Goes to Vegas

Key West’s “paranormal pop star,” the eerie and internationally renowned Robert the Doll, is on the move just before Halloween. 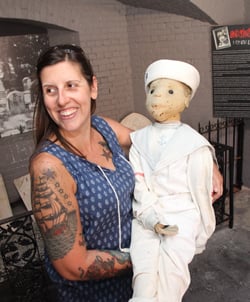 Robert, the famous haunted doll, gets a break from his protective exhibit case to prep for the Las Vegas trip with curator Cori Convertito. (Photo by Carol Tedesco, KWAHS)

Like so many other celebrities, he’s appearing in Las Vegas — but unlike Britney or Liberace (or virtually every other Vegas superstar), he’s appearing not on a mega-casino stage, but in the Travel Channel’s new television program titled “Zak Bagans: Mystery Mansion.”

Zak is widely acclaimed as the host of the Travel Channel’s reality series “Ghost Adventures” — and he plans to share Robert’s haunting history with his huge and devoted audience during the new program.

That history, admittedly, is pretty bizarre.

It all began in 1904, when a young Key West boy named Robert “Gene” Otto was given a 41-inch-tall excelsior-stuffed doll. Made by German’s Steiff Company (world famous for crafting teddy bears that have no eerie elements whatsoever), the doll became known as Robert after Gene gave it his own unused first name.

And that’s when things started getting weird. Throughout his childhood, Gene blamed Robert for naughty deeds, bad behavior and virtually anything negative that occurred — and the negative energy stuck.

The bond between man and doll didn’t weaken when Gene grew up and married a concert pianist named Anne. Despite Anne’s disapproval, he even built a special room for Robert in the turret of the couple’s Eaton Street home. 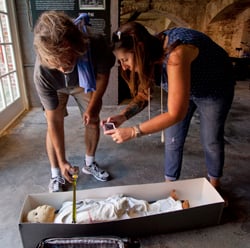 While Gene gained renown as an artist, Robert gained renown of a far more unsettling sort. Children passing by glimpsed him leering from the windows of the turret room and, according to local lore, a workman heard the doll giggling at him.

In 1974, Gene Otto died. Anne sold the house and quickly departed, leaving Robert behind for the new owners to find. Eventually, he was donated to the Key West Art & Historical Society and acquired a new home at the society’s Fort East Martello Museum.

Today there’s no doubt that Robert, who inhabits a rather elegant glass case, is the museum’s star attraction and one of Key West’s best known celebrities. He receives fan mail from as far away as Australia and Japan, and his website gets an astonishing number of hits every month.

His “hobbies” include adding unnerving special effects to museum visitors’ photographs (unless, that is, they ask his permission before snapping the shot). Like many other celebs, he’s notorious for disliking unauthorized photos taken by “paparazzi” — and bad luck sometimes follows intrusions into his privacy.

Robert has been the “guest star” at a convention of the Atlantic Paranormal Society and has made previous television appearances on the Travel Channel, Discovery Channel, numerous regional stations and more. 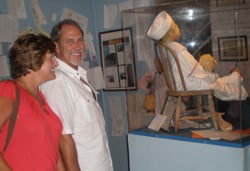 Robert will be home at Fort East Martello by Halloween, where he will continue to make visitors uneasy and apply “special effects” to unauthorized photos. (Photo by Penn Alexander)

So it’s really no surprise that Zak Bagans invited the Key West icon to Las Vegas to appear on his new show. Wearing his trademark sailor suit, Robert traveled to the gambling mecca with Key West Art & Historical Society curator Cori Convertito (though there’s no word on whether either of them tried their luck at the slots during the sojourn).

In any case, the infamous doll will be home in time for Halloween and no additional trips are planned any time soon. Robert will continue to unnerve fans at Fort East Martello — especially during the nightly Ghosts & Gravestones Tour, where he’s billed as “the most famous haunted plaything in the world.”