A vibrant new marine life mural has been added to the “gallery” of outdoor canvases in the Florida Keys. 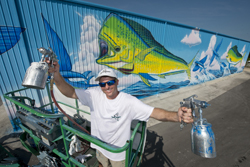 And it really is gargantuan — the large-scale painting, featuring a bull and a cow dolphin fish leaping to feed on flying fish, stretches an astonishing 252 feet wide and 32 feet high. The New Jersey-based artist says the bull and cow are the largest dolphin fish (also known as mahi-mahi) ever painted in the world.

FYI, dolphin fish — not to be confused with dolphin the mammal — are popular gamefish found off the Florida Keys. They delight anglers with their bold colors and their ability to leap at the end of fishing lines. 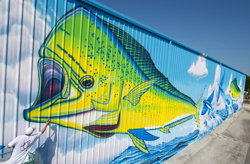 They’re also popular as lunch and dinner entrées on many Keys restaurant menus, with their hearty white meat prepared as everything from grilled dolphin sandwiches with seasoned mayo to garlicky dolphin piccata with pasta.

David Dunleavy reports that he worked seven or eight hours per day for 23 days to create his vivid illustration at the marina (which can be found at mile marker 90.8 bayside), and used more than 400 gallons of paint.

And because the marina is located just off the Florida Keys Overseas Highway, his aquatic artistry will be visible to countless numbers of southbound motorists for many years to come. 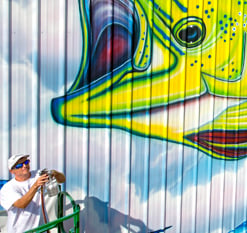 “Dolphin Rodeo” is the 62nd in a series of outdoor sea-life murals David has painted in the U.S., the Bahamas and Australia. It’s his fourth mural in the Keys, and has earned the distinction of being the largest outdoor artwork ever created in the island chain.

“Islamorada is the sportfishing capital of the world, and there’s no better location for this mural,” said David shortly after completing the piece. “I want to inspire people to put down their smart phones, go out and experience sea life, whether they go fishing, paddleboarding or scuba diving.”

Another of David’s outdoor murals has been making a splash in the Upper Keys for nearly 10 years. Two exterior walls of Islamorada’s Florida Keys History of Diving Museum were the “canvas” for an undersea vista that he painted with marine life master Guy Harvey. Dedicated in February 2005, the mural includes manatees, a whale shark, finfish and endangered species found on the Florida Keys’ living coral reef. 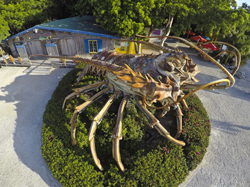 “It’s all about teaching people about conservation and protecting our oceans for future generations,” said David of his work.

David Dunleavy is not the only artist to have created public outdoor art in the Keys.

Robert the Doll Goes to Vegas

'One Human Family': Living In Harmony