“Today’s the day!” That was the cry of Mel Fisher every day as he and his dedicated crew searched for the shipwreck of the Spanish galleon Nuestra Señora de Atocha, sunk in the waters of the Gulf of Mexico in 1622. 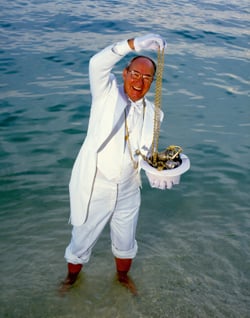 Adventurer Mel Fisher, discoverer of the shipwrecked Spanish galleon Atocha, proved that the American dream is thriving -- at least in the Keys. (Photo provided by Mel Fisher's Treasures)

Key West has become known as a locale where age discrimination is non-existent. And well it might — what with residents of all ages owning businesses, chartering fishing boats, and taking part in virtually all the activities of the island. One of the most adventurous seniors ever to live and work in Key West was Mel Fisher.

Mel and his crew had been searching in Keys waters for the Atocha without success until, in 1971 they found a Spanish anchor. The search continued with limited but encouraging results — until 1975, when Mel’s son Kane found a silver bar whose numbers identified it with the manifest of the Spanish galleon. They knew they were on the right track to discover the fabled shipwreck and the treasures and artifacts it held.

And discover it they did, after ten more years of searching. On July 20, 1985, when Mel Fisher was 63 years old, his crew uncovered a reef of silver bars. They had found the Atocha at last!

Recovering the treasures and artifacts, and performing painstaking underwater archaeology on the site, went on for many years. In fact, Mel himself continued diving until the age of 76. Riches beyond anyone’s expectations, and historic artifacts that were equally important, were discovered at the wrecksite of the Spanish galleon. 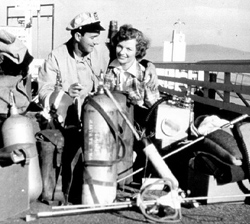 Mel Fisher was born in Hobart, Indiana — an unlikely place to spawn an expert deep-sea diver. Some claim he was influenced by Robert Louis Stevenson’s “Treasure Island.” In any event, he was fascinated by the brand-new sport of diving and became one of its pioneers.

After a stint as a chicken farmer in California, Mel became enamored with diving rivers and turned his focus to the dive business. He and wife Deo opened a dive shop, and Mel expanded his efforts to dive on shipwrecks.

He developed a fascination with shipwreck salvage, which eventually led him to Florida and the Keys. The rest is history.

The Mel Fisher Maritime Museum in Key West is the resting place for many of the priceless objects Mel found. There visitors can learn more about the discovery of the Atocha and the Santa Margarita, another galleon from Spain’s 1622 fleet, and view treasure ranging from gold bars to contraband emeralds. Located at 200 Greene St., the museum is open 365 days a year. 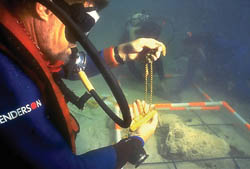 A diver examines gold bars and chains on the site of the Nuestra Se?nora de Atocha shipwreck about 35 miles off Key West. (Photo by Pat Clyne/Mel Fisher Maritime Museum)

In honor of the illustrious Mel Fisher, who died in 1998, a festival called Mel Fisher Days is held each year to celebrate his historic discovery. This year’s celebration is scheduled for July 11-14 with events including a costume contest, block party, “treasure brunch” and a meet-and-greet with crewmembers who helped salvage the legendary shipwreck.

Ever the dreamer, the optimist, and a model of perseverance, the late Mel Fisher is an inspiration to seniors. His motto of “Today’s the Day!” is a valuable reminder that each day can bring excitement, promise, and treasure — as long as you have the vision to look for it.