For Islamorada resident and passionate fly angler Heidi Nute, fly fishing in her Florida Keys backyard has become a hunt for giant tarpon.

Heidi Nute’s passion for fly fishing led her to an astonishing tarpon catch.

On a warmer-than-usual Saturday afternoon this past February, she found one (did she ever!). Heidi landed a massive 152.8-pound fish — the largest tarpon caught by a female angler on a fly rod that has EVER been recorded by the International Game Fish Association (IGFA).

How did the history-making story unfold? Heidi was fishing with her husband, fellow fly angler Paul Nute, and Islamorada’s Captain Tim Mahaffey, in the Everglades near Flamingo. After a slow morning, the trio had hooked six tarpon in the shallows. The last and largest ate Captain Mahaffey’s fly without hesitation.

She patiently enticed the giant fish to bite her bug and gamely fought to land it while it jumped 16 times in a grueling 65-minute period. When the tarpon was finally out of fight, the captain skillfully gaffed it — using a historically successful folding-barb kill gaff that the late legendary angler Billy Pate used.

The use of the gaff was a rare piece of serendipity — because Billy Pate reportedly boated all his record-setting tarpon and marlin with that very hook.

Coincidentally — or maybe not — Heidi and Paul had bid on the item and won it during an auction of Pate memorabilia. Later, Heidi had enlisted the aid of local Captain Randy Towe to sharpen the blade and cover the shaft with an anti-slip wrap.

“It is just great to have that piece of history used to get this fish,” Heidi said after her astonishing catch.

Her pending world record submission must meet certain criteria for the IGFA to verify the record. Steps included testing both the length and breaking strength of her leader, and ensuring the catch was made according to international angling rules laid out by the IGFA.

Although the 12-pound tippet over-tested slightly, Heidi’s entry has already successfully qualified for the women’s 16-pound fly rod record for tarpon — held previously by Diana Rudolph for catching a 135.5-pounder.

Heidi’s submission is now in the IGFA’s record certification process, and her outstanding new record should be finalized within a few weeks.

Based on her accomplishment, you might think Heidi has been a “top gun” fly angler for 20 years or so — but that’s not the case. 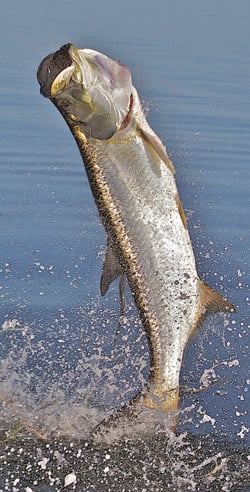 A tarpon seemingly stands on its tail after being hooked in the Florida Keys. (Photo by Pat Ford)

In fact, she scored her world-record fish — the fish of a lifetime — just seven years after she graduated from Sandy Moret’s world-renowned fly-fishing school in Islamorada.

Before that, her prior experience only included fishing with her father in the streams of upstate New York’s Catskill Mountains, where she had used light spinning rods for small trout.

Since taking that fateful class, however, Heidi has competed and triumphed in several Keys tournaments. She scored back-to-back victories, alongside Captain Rob Fordyce, in the 2012 and 2013 Ladies Invitational Tarpon Fly tournaments — and took grand champion angler titles at the 2009, 2010 and 2013 Women’s Fall Fly Classic.

“I attribute 100 percent of my success to the caliber of Keys fishing guides and their coaching,” said Heidi, who moved with Paul from Miami to Islamorada full-time in 2011. “Fishing with the very best has done a lot to shorten the learning curve.”

Now that her new world record seems certain, what’s next for this intrepid angler?

According to those in the know, Heidi is in hot pursuit of the 12-pound tippet record.

Julia and Edie Get Married — and Other Joys of the Season