When a Hurricane Threatens

Traveling to the Florida Keys
During Hurricane Season 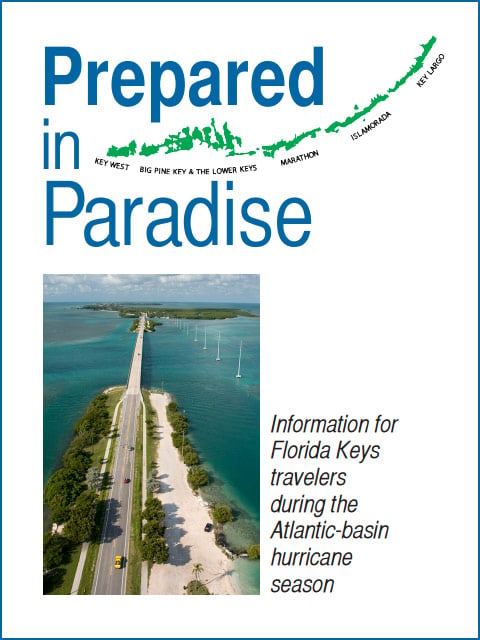 Because they are on the northern fringe of the Caribbean, the Florida Keys occasionally are threatened by tropical cyclones, a generic name for a low-pressure weather system with organized thunderstorm activity and circular winds. When the wind speed of a tropical cyclone reaches a sustained 74 mph, it is classified a hurricane.

In the Caribbean Sea and Atlantic Ocean tropical cyclones can present a threat to most Caribbean countries, eastern Mexico, and North American coastal areas from Texas through Nova Scotia. 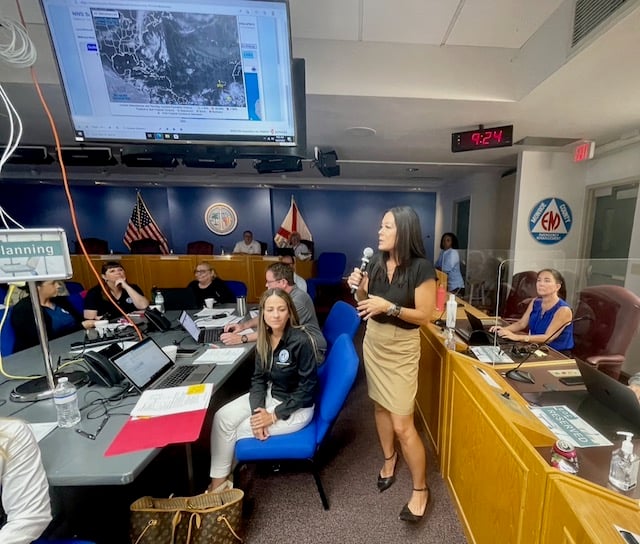 The Monroe County (Florida Keys) Tourist Development Council (TDC) has a formal communications program that is tightly coordinated with local emergency management officials to provide crucial information to help visitors safely exit the Florida Keys in the event a hurricane threatens the region. 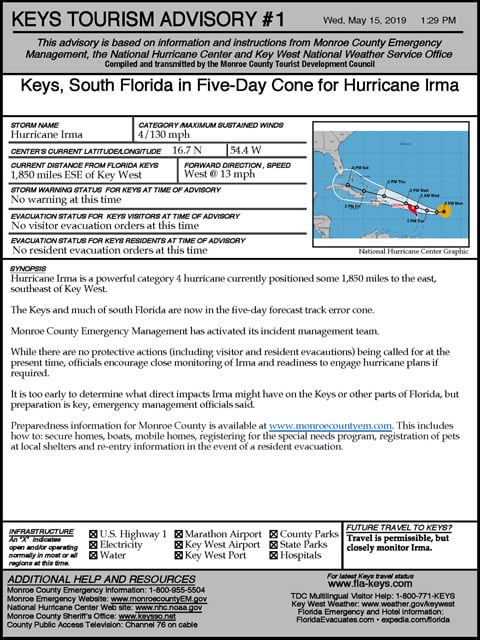 Because the Florida Keys tourism industry cares about the safety of the island chain’s visitors, the TDC endeavors to provide honest, trustworthy information about traveling to the Keys, and even advises people when it is not appropriate to travel in the unlikely event of a storm threat.

The TDC’s visitor safety program has been an award-winning model for other destinations in hurricane-prone regions. In 2007 both the National (U.S.) and Florida Hurricane Conferences for the first time honored the Keys programs with public awareness awards.

About Traveling to the Florida Keys During Hurricane Season

What is a hurricane?

The terms "hurricane" and "typhoon" are region-specific names for a strong tropical cyclone. A tropical cyclone is the generic term for a low-pressure weather system formed over tropical or subtropical waters with thunderstorm activity and surface wind circulation. Tropical cyclones with maximum sustained surface winds of less than 39 mph are called tropical depressions. Once a tropical cyclone reaches winds of at least 39 mph it is typically called a tropical storm and assigned a name. In the Atlantic Ocean and Caribbean Sea, once the winds reach 74 mph, the system is called a hurricane. There are five hurricane wind scale categories, increasing in severity from Category 1 to Category 5.

When is hurricane season?

The Atlantic hurricane season formally begins June 1 and ends November 30. Historically, the chances of hurricane activity are greater between August 15 and October 15.

Can I travel to the Florida Keys during hurricane season?

Absolutely. The Keys are very popular with vacationers in the summer and fall months. Many visitors from the United Kingdom and Europe visit during that period. Many great events are scheduled in the Keys during that time, as school is back in session and family vacationing is at a lull. Historically, the chances are excellent that your Keys vacation will not be interrupted by a hurricane.

Why, when I see a hurricane forecast tracking map, is so much area covered with that cone-like shaded area? 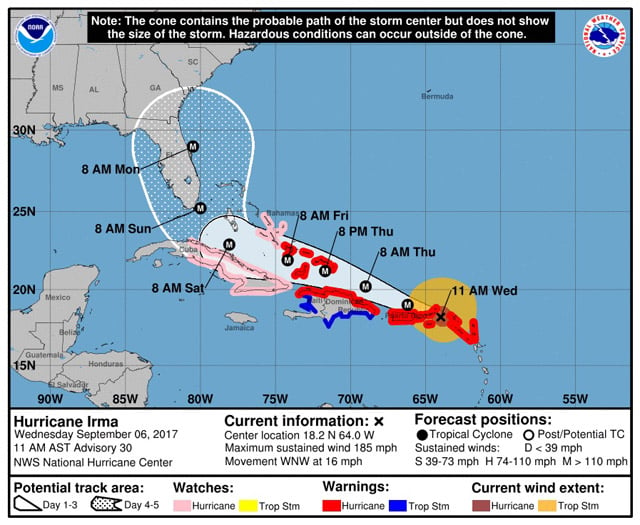 Although hurricane forecasting has improved each year, it is still an inexact science, especially when the storm is more than three days away.

The National Hurricane Center (NHC) produces two types of tracking maps. The first shows the area of strike possibility from zero to three days out and the second includes four to five days out.

Because hurricane forecasting is not an exact science, NHC forecast tracks of the center line have high error rates, especially forecasts issued more than three days ahead of a potential strike. The average track forecast errors in recent years are used to construct the areas of uncertainty for the first three days (solid white area) and for days 4 and 5 (a white stippled area). For the four- and five-day forecast, the error can be hundreds of miles.

The primary purpose of the four- and five-day track forecast map is that the hurricane center wants people to simply be aware of the storm, think about what actions to take in the event it continues to proceed in their direction, and be ready to follow the instructions provided by emergency management officials and your lodging management. The Florida Keys may be in the stippled area, but end up not being impacted by a storm.

What do I do if I'm in the Florida Keys and a hurricane threatens the region? 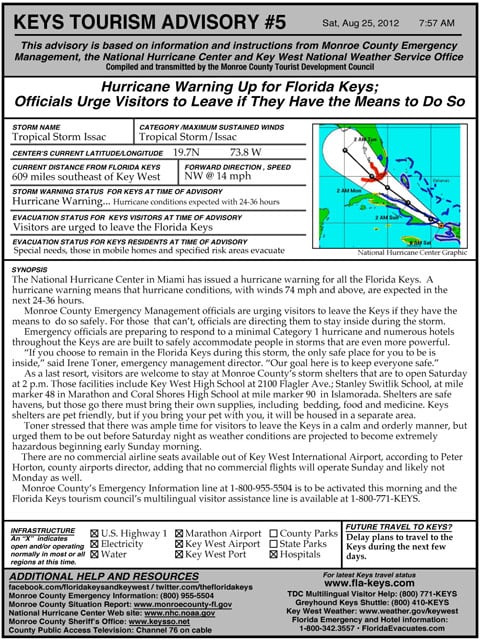 Throughout the summer and fall, Keys emergency management officials keep in constant contact with the Florida Keys National Weather Service Forecast Office, based in Key West, whose meteorologists collaborate with the National Hurricane Center in Miami. And the Keys tourism council’s communications program lets visitors know of any need to evacuate, and long before travel conditions become hazardous. Local media reports and official advisories to lodging facilities provide updates and details about possible evacuation orders. If you hear of a storm threat, check with the registration office, visit the Florida Keys website at fla-keys.com or, while in the Keys, call the visitor assistance line at 1-800-771-KEYS. Should a storm threaten, for safety reasons, visitors are always asked to leave the Keys first. Although emergency officials will err on the side of caution, evacuation orders are only given if there is a significant storm threat.

What if I don't understand English very well?

The Keys tourism council has made available a round-the-clock, multilingual visitor assistance line for vacationers once they are in the Keys. Call 1-800-771-KEYS for any translation or information assistance.

When do I have to leave?

If a visitor evacuation order is necessary, officials strive to issue it early in the morning to provide ample time to make alternative travel arrangements. There is no need to panic, however, visitors are urged to follow emergency directives in a timely manner.

I have immediate plans to travel to the Keys, but an evacuation has been ordered. Why can't I continue with those plans?

If an evacuation is ordered, there will be a steady stream of traffic leaving the Keys. If you travel to the Keys, you will be required to leave. Furthermore, most, if not all visitor facilities will not be open, as their owners make hurricane preparations. Buildings will be shuttered. Boats will be secured in protective moorings. State and county parks will close. So even though in the early stages of an evacuation, visitors may be able to reach the Keys, they will not enjoy the traditional benefits of a Keys vacation. It's best to reschedule travel plans to visit after the potential danger has passed.

I'm in the Keys and there's an order to evacuate, but I don't have a car. How do I leave?

There are several options. Check with the front office or hotel concierge to see if there are any rental cars or flights available from Key West International Airport. A number of ground transportation shuttle services operate between Key West and Miami and Fort Lauderdale International Airports. Typically, Greyhound Bus Lines adds extra buses to accommodate vacationers leaving the Keys. The TDC surveys transportation companies to determine what is available, and passes that information via advisories to accommodations facilities and posts it on the TDC website, fla-keys.com.

Where can I go?

Local tourism officials realize that an unexpected vacation interruption is a hardship on visitors. The tourism council works cooperatively with other Florida destinations that typically set up special hotlines to provide hotel availability and rates. These numbers are published in advisories sent to properties and posted on the Keys website.

Visit Florida is partnering with Expedia to share availability and rates for evacuees. In the event of a storm, an online resource is to be available at Expedia.com/Florida.

What about lodging refunds?

Each property has its own refund policy. The Lodging Association of the Florida Keys & Key West urges their members to provide refunds of unused nights as soon as local officials issue a visitor evacuation order. The majority of Keys properties subscribe to this standard. Prior to reserving travel, visitors should have a clear understanding about their lodging facility’s refund policies in the event of a hurricane threat. Travel insurance plans are available from companies that can provide additional fiscal protection. Expedia.com has a “Hassle-Free Hurricane Promise” for travelers that book vacations on their website. If the National Hurricane Center issues a hurricane watch or warning for any destination, Expedia will waive associated Expedia.com cancellation fees and advocate with their travel partners to waive applicable fees and help find new travel options.

Why, during an evacuation, are visitors asked to leave while residents can stay? And why must tourists leave so early?

Visitors are asked to leave the Keys during any category storm while residents are mandated to leave during a severe hurricane of Category 3 or higher. The early egress of visitors is for their own safety. Officials want visitors to have plenty of time to get out of harm's way as well as to not impede the movement of Keys citizens in the event of a resident evacuation. Also, because of the Keys' unique nature as a chain of islands, with one highway in and out, the region requires more time to evacuate than other coastal areas. And emergency officials must react earlier to avoid impacting possible evacuations of other South Florida communities.

In the event a hurricane does impact the Keys, there is high likelihood of power outages, temporarily impassable roads and airports that will be temporarily out of service. Most, if not all, hotels will be closed and visitor facilities will not be operational. At that point, the top priority for government and business owners is to restore facilities so the Keys can once again provide full-service vacation opportunities.

When can we resume our vacation to the Keys?

This depends on several factors. If only a visitor evacuation has been ordered and the storm misses the Keys, visitors often can begin returning the day after the threat passes. If both visitor and resident evacuation orders have been issued, and the storm misses the Keys, it might take a few days for visitor facilities to reopen. If the storm impacts the Keys, visitors can begin returning after electricity, road access and other infrastructure, such as transportation and hospitals, are restored. Check the Florida Keys website at fla-keys.com for the latest information concerning the status of the Keys as well as the lodging facility where you wish to stay.

When I see a satellite picture of a hurricane, it looks like a very large area is being affected. But many times, a much smaller area is significantly affected. Why is this so? 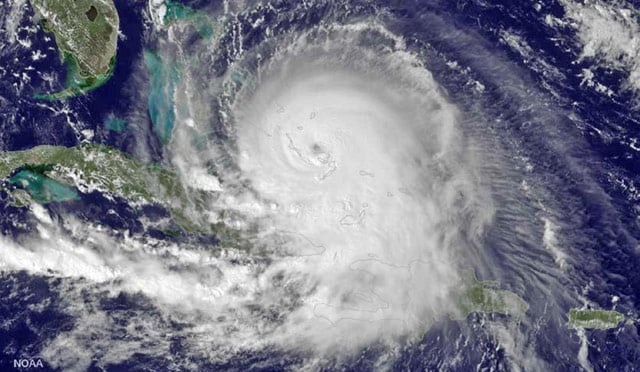 Simple. The strongest portion of a tropical cyclone is concentrated around the eye or center of the storm. Typically, hurricane-force winds usually emanate anywhere from 40 to 50 miles from the center, according to the National Hurricane Center.

Where can I monitor hurricanes and receive more information?

The National Hurricane Center — operated by the National Oceanic and Atmospheric Administration (NOAA), a United States government agency, monitors hurricanes both in the Atlantic and Pacific oceans. Its extensive website can be found at www.nhc.noaa.gov. Information is also provided on Facebook and Twitter (@nhc_atlantic).

Other resources to keep up with the latest changes include: