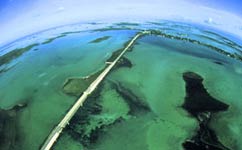 From Miami to Key West is only 45 minutes by airplane, but visitors miss a great adventure if they fail to savor the pleasures of America's most rewarding motor odyssey.

Jumping off point to the Florida Keys is Key Largo - 42 miles south-southwest of Miami. The longest island of the Keys chain, Key Largo is the site where Humphrey Bogart and Lauren Bacall battled both Edward G. Robinson and a hurricane in the movie of the same name.

Bogart's Key Largo connection still is prevalent today as visitors can view the African Queen, the actual boat Bogart skippered in the movie, on display at MM 100 next to the Holiday Inn Resort & Marina.

Islamorada - the centerpiece of a group of islands called the "purple isles" that includes Plantation Key, Windley Key and both Upper Matecumbe Key and Lower Matecumbe Key. The name sometimes has been ascribed to Spanish explorers who named the island - after the Spanish meaning of the word "morada" - for the heavy concentration of the lovely violet sea snail, janthina janthina, found on the seashore here. Two offshore islands here in the "purple isles" have colorful, historical pasts; Indian Key, where a pioneer, 18th century tropical agriculturist was killed by raiding Indians, and Lignumvitae Key, famous for the hardwood tree of the same name. Both are accessible by private and rental boats from nearby marinas. 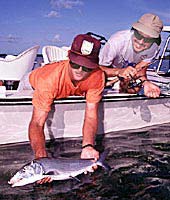 Known as the "Sportfishing Capital of the World", Islamorada is heralded for its angling diversity and features the Keys' largest fleet of offshore charter boats and shallow water "backcountry" boats.

The Keys boast more sports fishing world records than any other fishing destination in the world. Anglers can find sailfish, marlin, dolphin (the fish, not the mammal), kingfish, snapper, barracudas and grouper in the ocean. In the shallow waters exist tarpon, bonefish, redfish, and a cavalcade of other species.

Long Key State Park has nature trails leading to tropical hammocks reminiscent of the Keys' wilderness of a century ago, and Grassy Key is the site of the Dolphin Research Center, one of three facilities that provide visitors an opportunity to interact with the intelligent mammals sometimes known as porpoises. 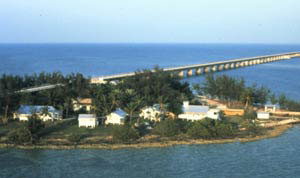 Marathon also is home to Crane Point Hammock, a 63.5-acre land tract that is one of the most important historical and archaeological sites in the Keys. The area contains evidence of pre-Colombian and prehistoric Bahamian artifacts and was once the site of an entire Indian village. At Crane Point is the Museum of Natural History of The Florida Keys and the Children's Museum - the first facility catering exclusively to the Keys' littlest visitors - explore the islands' rich natural history.

Marathon is also accessible by air with commuter airline flights from other areas in Florida, as well as a large general aviation facility.

A drive across the Seven Mile Bridge at Marathon leads to the Lower Keys, but don't pass up the small island below the old Seven Mile Bridge. Pigeon Key once housed the workers who built Flaglers' railroad in the early 1900's. While the rest of the Keys have evolved throughout the 20th century, this tiny key has essentially remained unchanged. Step on Pigeon Key and step back into time.

The sheer sweep of the Straits of Florida and the Gulf of Mexico is readily seen from Bahia Honda Bridge. A state park - featuring one of the top 10 beaches in the United States as designated by several travel magazines - makes it easy to sample the atmosphere of what are recognized as "America's Caribbean Islands."

Big Pine Key is noted for the Looe Key National Marine Sanctuary, rated by many as one of the most spectacular shallow water dive experiences to be found. A national refuge for miniature Key deer, tropical forests and even a few alligators is also situated on this island. Popular nature tours by kayak, sail or motorboat offer unforgettable opportunities to view the unique flora and fauna of this facet of the Keys.

Key West is the final stop on the Overseas Highway, where the land ends and meets the sea amid 19th-century charm and 20th-century attractions. The ambiance of the nation's southernmost city - which is situated closer to Havana than Miami - is embedded in the quaint, palm-studded streets, historic gingerbread mansions built a century ago and a relaxed citizenry of self-styled "Conchs".

In 1931, Ernest Hemingway purchased a pre-Civil War mansion in Key West and lived in it for 10 years while writing some of his best-known novels. His legend remains and visitors continue to seek out his home - now a museum.

It has been said that the idiosyncratic architecture - and the laid back atmosphere - of Key West probably has nurtured the talents of more writers per capita than another other city in the country. Ten Pulitzer Prizes have been awarded to writers that have lived in Key West and presently more than 100 published authors reside, full- or part-time, in Key West.

A legend-in-the-making, Key West's own Mel Fisher has recovered more than $400 million in gold and silver from the ship Nuestra Señora de Atocha, a 17th-century Spanish galleon that sank 45 miles west of Key West. Fisher, who spent 16 years of his life searching for the booty, has established the Mel Fisher Maritime Heritage Society Museum, where visitors may view and touch some of the riches of the Atocha and the Santa Margarita.

At day's end, visitors gather at Mallory Square to "call it a day." Hardly a contrived activity, the daily "sunset celebration" is a tradition that Key Westers share with visitors. While musicians, jugglers, mimes, an occasional fire-eater and even the Key West Cookie Lady provide entertainment, the sun sinks slowly below the horizon. And, if the sunset is good enough, the audience respectfully applauds.